My destiny is to create... One day I will create a monstrosity so terrible, it will seep into the deepest recesses of human fear...

Burning Rhapsody (焔炎狂詩曲, Homura-en kyōshikyoku?) is the third chapter of Vampire Night. It is associated with Guillaume.

Vampire hunters Michel and Albert arrive in the castle where Guillaume sneaks behind them and takes Caroline as his hostage, forcing the hunters to pursue him all the while sending his minions to fight the hunters. After a long chase, Guillaume finally confronts the hunters on the rooftops, transforming into his true form. After he is defeated, Guillaume reverts back to his human form. Refusing to accept defeat by humans, he commits suicide by jumping from a cliff while laughing maniacally. 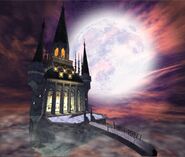 Add a photo to this gallery
Retrieved from "https://thehouseofthedead.fandom.com/wiki/Burning_Rhapsody?oldid=26768"
Community content is available under CC-BY-SA unless otherwise noted.