The House of the Dead III(flashback)

Chariot has been revealed to be a boss in the upcoming House of the Dead: Scarlet Dawn, resurrected and tasked by Thornheart to roam the ground floor and prison area of the Scarecrow Mansion. He received a major upgrade, having armor on almost every part of his body. His weakpoints are his glowing joints which are not protected by armor and for the first part of the fight he's nearly invincible to all attacks. However once the player received an RPG and hits The Chariot once, they are exposing the weakpoint depending on where the rocket hit.

Chariot is an undead humanoid clad in a suit of metallic armor that covered his entire body. His head is covered with a gas mask-type coverage allowing it to breath. The armor itself is strong enough to protect the figure but must have been damaged when gunfire is impacted on it. The reason for his armor outfit use is because it's flesh isn't strong enough to withstand ammunition which explains the red scar on it's right breastplate is it's weakness and why he vomits green fluids when bullets penetrate through. Aside from the suit of armor, he carries a bardiche as a weapon to defend itself.

In its Scarlet Dawn iteration, Chariot has a similar form, but a much larger profile. Its weakpoints also changed from its chest to its joints. 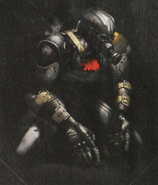 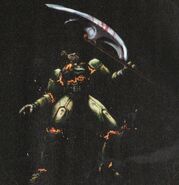 The Chariot as seen in House of the Dead: Scarlet Dawn.
Add a photo to this gallery
Retrieved from "https://thehouseofthedead.fandom.com/wiki/Chariot?oldid=12064"
Community content is available under CC-BY-SA unless otherwise noted.