A civilian being attacked by creatures.[src]

Civilians (民間人, Minkan hito?) are minor characters found throughout the House of the Dead video game franchise. They are commonly attacked by enemies, and, if rescued by the player, will grant rewards.

In The House of the Dead and its sequel, some civilians award an extra life if rescued; furthermore, saving enough civilians awards one or two more lives at the end of a level. Shooting a civilian also deducts one life.

The survival or death of civilians often alter the player's route through a level. If every civilian is rescued, a secret room filled with bonus items appears prior to the final boss.

In House of the Dead: Scarlet Dawn, civilians only award points when rescued, and count as "Events" (completions of time-sensitive scenes) in the player's "stage result" tally. There is no life penalty for shooting civilians; the only feedback given is a giant "X" appearing over the civilian's body. In addition, rather than being tied to civilian rescues, the bonus room is activated if the player reaches the final area without using a continue.

Due to the collapse of civilization, civilians are absent from The House of the Dead III, 4, and 4 Special. III instead features "Rescue Events" where the player must save their partner from creatures. Doing so grants a life bonus; failure results in the captured player being attacked, though they do not lose a life. Successfully completing all "Rescue Events" opens the bonus room.

Zombie Revenge, a spin-off game, features only one civilian named Yoko. In the beginning of the game, the protagonists encounter her being attacked by zombies. Her survival or death determines the ending of the game.

The House of the Dead / Remake

In the first game, civilians are DBR Corporation researchers who worked for Dr. Curien. Many left him because of his inhumane experiments and obsession with curing his terminally ill son. Curien went mad, unleashing his test subjects upon the remaining team members.

Researchers in peril are found throughout the first three chapters. If rescued, a few give security cards to unlock different areas of the Curien Mansion and laboratory.

The sequel involves the residents of a large, unnamed city who are trapped in Caleb Goldman's outbreak. Children, adults, and the elderly are encountered in the first four chapters.

In the normal ending, a group of civilians and supporting characters greet AMS agents James Taylor and Gary Stewart outside of Goldman's headquarters.

The residents of Bayou City, Louisiana serve as civilians in Overkill.

Civilians in House of the Dead: Scarlet Dawn are party guests who are being attacked by creatures in Scarecrow Manor. They appear in the prologue chapter, the Annex, and the Elevator Lobby.

The spin-off features only one civilian: Yoko, a girl who can be rescued from zombies in the first chapter. Her boyfriend was killed by the undead. Regardless if she lives or dies, Yoko yields a collectible floppy disc; if saved, she explains that it was given to her by "a man with golden eyes".

Yoko's fate determines the game's ending. If rescued, she is shown in the same warehouse she was found in, waiting impatiently for ZED to pay her. If killed, Yoko is depicted feeding on something - presumably as a zombie - and the screen cuts to black as she turns her head toward the camera.

Simon holding up a researcher.

“You can go up stairs from that room."

HOD female researcher at the Courtyard.

HOD male researcher at the Bridge.

“They’re inside. Help them.”

HOD female researcher is running away from the three creatures.

Cyril is following a female researcher on the attract mode.

“Others are still inside. Save them.”

Two civilians are killed by Kageo and Bourbon.

“There’s one more down there! Hurry! Go help him!”

A civilian about to be attacked by a David creature as seen in the attract mode. Note the warning written on the screen.

A child civilian running from a house full of creatures.

David about to kill a female civilian.

Three David creatures cling to a red car encountered in the beginning of Muddy.

Tower with two civilians in its mouth.

A female civilian in the clock tower's dungeon.

A male civilian about to be attacked by two Davids.

A civilian swimming in the city canals.

A civilian being held by Kageo.

A civilian cowering while a Max creature ambushes the player.

A civilian seen before the Tower boss fight.

The corpses of five civilians who were killed by Hierophant. 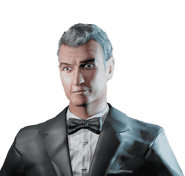 Civilian art from getting a C rank in the minigame on Scarlet Dawn's official website.

Civilians inside the Scarecrow Manor.

A crowd of party guests.

Civilians running away from the creatures.

A female civilian being threatened by Rogers.

Rogers grabbing onto a civilian's leg.

Wilson and a civilian in the Annex stage.

A civilian being threatened by Bentley.

Players rescuing a civilian from Chariot.

Rogers and a civilian fighting during the Elevator Lobby stage.

A horde of creatures chasing civilians.

A civilian nearly getting run over by creatures.

Three civilians are running away from the five creatures. 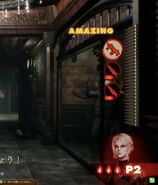 Civilians trapped inside a prison cell.

A researcher from The House of the Dead: Nightmare.
Community content is available under CC-BY-SA unless otherwise noted.
Advertisement