DBR's projects were overseen by research director Dr. Curien, with financial backing provided by Caleb Goldman. The organization became infamous for Curien's production and usage of hostile creatures to mastermind a 1998 incident, which lead to investigations by the AMS government agency.

The company's namesake came from the BioReactor, a DNA-editing machine that was invented by Dr. Curien.[2][3][4]

After learning of Dr. Curien's research to remove the barrier between life and death, financial group head Caleb Goldman took interest in the doctor's research and funded DBR, hiring Curien as its research director and providing him with a team of researchers. Through his experiments, Curien produced dozens of creatures as well as several unique mutations, the latter the Doctor would refer to as "perfect creations".

Due to the inhumane nature of the project, most of DBR's researchers began to abandon Curien, who was eventually driven to the brink of madness. Curien then began to use DBR's personnel as test subjects, raising the suspicions of the AMS, who had been observing his activities for some time.

On December 18, 1998, Curien unleashed the creatures in his own mansion where they began to roam and kill off his own researchers, prompting one of the survivors, Sophie Richards, to call for help. AMS agents Thomas Rogan and G arrived and the creatures were repelled from escaping the mansion grounds. Curien was killed by his own creation, Magician, who in turn was destroyed by the agents.

It is unknown what became of the DBR Corporation after the Curien Mansion incident, though the EFI Research Facility included an area dubbed the "DBR Institute", indicating that the organization may have had a role in some of the facility's experiments. 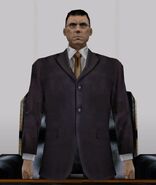 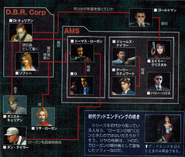 DBR personnel as seen in the character diagram from page 69 of The House of the Dead III Perfect Guide.

Texture of DBR ID tag worn by all researchers.