The Wiki of the Dead
Register
Don't have an account?
Sign In
Advertisement
in: Pages needing references, Characters, Playable characters,
and 4 more

Dan after checking his radio.[src]

Dan Taylor (ダン・テイラー, Dan Teirā?) was a member of Thomas Rogan's secret division. He is a supporting character in The House of the Dead III, and is playable only in the prologue chapter.

Dan assisted Rogan in a 2019 raid of the EFI Research Facility, which was conducted to find the source of civilization's collapse. He was ultimately killed by a behemoth named Death.

It has never been officially confirmed if Dan was related to James and Ryan Taylor, despite sharing the same last name. 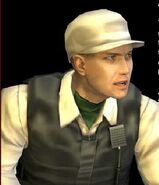 Dan Taylor after being killed by Death.

Dan's bio from page 47 of The House of the Dead III Perfect Guide.