Darkness is the third chapter of The House of the Dead 2.

"Well, the 1998 Curien case....guess who was behind it? It was Goldman. He's the head of one of the most eminent financial groups and an expert on the genome theory. We have to stop him!" says Harry Harris as he shares his knowledge about the December 18, 1998 Curien Mansion case.

AMS agents James Taylor and Gary Stewart leave Venice by speedboat, encountering mutants like Ebitans among the waters. Depending on whether they leave from Sunset Bridge of the wharf, the AMS agents may pass the water gate to go further.

Amy Crystal then receives a call from none other than Goldman himself, who says that he'll be waiting at the Colosseum on the north side of the city. Harry, despite fearing it might be a trap, presses on anyway.

Amy and Harry then drop the AMS agents at a nearby dock to split up (i.e. Amy and Harry will go to the Colosseum through the waters of Venice, while James and Gary take the underground passage). They then encounter a group of five serpents, four red snakes and one blue dragon, collectively called the Tower. After defeating the red snakes, the blue dragon escapes to either a sand arena or a pool of water. The AMS agents defeat the blue dragon, but receives a call from Amy as they encounter Strength, who would later severely injure Harry. Amy screams in terror to the point of dropping her phone. 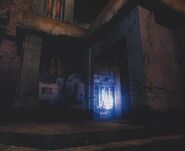 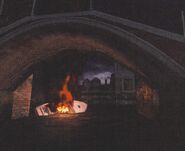 A sinking boat on fire.
Add a photo to this gallery
Retrieved from "https://thehouseofthedead.fandom.com/wiki/Darkness?oldid=15782"
Community content is available under CC-BY-SA unless otherwise noted.