The Wiki of the Dead
Register
Don't have an account?
Sign In
Advertisement
in: Bosses, Humanoid bosses, Male bosses, The House of the Dead III bosses

Type-0011, codenamed "Death" (デス, Desu?), was a mutant juggernaut dressed as a security guard. He[note 1] is the first boss of The House of the Dead III, being encountered in both the second chapter and one of the next three chapters (depending on the player's choice).

Wielding a skull-studded club, Death was the one-man security force of the abandoned EFI Research Facility. He persistently stalked and attacked his prey. His weak point was his head.

The creation of Death was to serve as a security guard for the EFI Research Facility, chasing down intruders before assaulting them with his club.

In October 2019, a group of combat professionals raided the facility to find the source of humanity's collapse. Death killed tactical expert Dan Taylor and wounded retired AMS agent Thomas Rogan, who was rescued by Daniel Curien, a resident of the facility.

Two weeks later, Rogan's daughter Lisa and former partner G investigated Rogan's disappearance. Death burst from the ground and chased them either through the facility's front entrance or parking garage (the route is determined by the player). Lisa and G fended him off and escaped.

Later, in the Information Systems Department, Lisa accidentally triggered an alarm, alerting Death. A chase ensued through several long corridors, with the pair continually damaging Death and losing him as they ran into separate rooms. Death trapped them in a corridor to the elevator, but collapsed and died after being shot repeatedly in the head.

Death is a brutish, persistent boss whose fights consist of stalking the player(s) through different environments. While his speed remains unparalleled when compared to the other bosses and can prove to be a challenge when running away from or alongside him during battle, Death often leaves his weak point vulnerable enough where player(s) can shoot at him easily.

Death is fought twice throughout the game: at the beginning of Chapter 1 as Lisa and G enter the EFI Research Facility, and again in Information Systems.

Death and a horde of creatures. 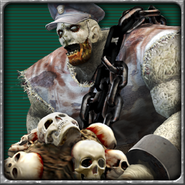 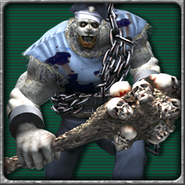 Death in the House of the Dead III Perfect Guide by Famitsu.

Death's bio from an archived House of the Dead III website. 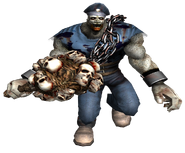 Death among a horde of creatures on the official flyer.

Death's appearance in The Typing of the Dead 2.

Death emerging from the ground. 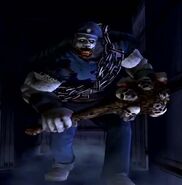 Death in the Information Systems Department.

Death with his face bloodied.