Diane (ディアヌ, Dianu?), also referred to as the Queen of Ice, was a vampire and the lover of Auguste. She is the secondary antagonist and the fourth boss of Vampire Night, a 2000 spiritual successor to the House of the Dead series.

Having lived a life of hostility and sacrifice, Diane was loyal to Auguste and attempted to protect him from vampire hunters Michel and Albert. She was ultimately killed inside the castle.

Diane wields hydrokinetic powers both in her human and vampire forms. As a vampire, she appears as a monstrous mermaid-like creature. Her weak point is the upper half of her body.

As member of a family with mermaid lineage, Diane has been persecuted since birth. Therefore, she understands and shares Auguste's sorrow. She decided to follow Auguste, even though she realized that no light would shine upon their path. Her love for Auguste was her only motive to become a vampire..

Since birth, Diane and her family have been persecuted by humans due to their mermaid lineage, causing her to loathe humanity. One fateful day, Diane met the vampire, Auguste, who's sorrows she both shared and understood due to how humanity viewed them.

Having developed feelings towards the vampire count, Diane decided to follow him by becoming a full-fledged vampire, fully aware that no light would shine upon their path.

After the vampire hunters, Michel and Albert arrived at the village, Diane and the other vampires observed the hunters' progress. One by one, the hunters were able to defeat Bathe'lemy, Guillaume and Rauoul, leaving only Count Auguste and Diane herself as the remaining vampires.

As Auguste was about to head out to deal with the hunters, Diane stopped him and volunteered herself to repel the hunters, much to Auguste's reluctance. Diane sent her minions to attack the hunters, all the while projecting illusions of herself, warning the hunters to retreat. The hunters didn't heed her warnings and pressed onward, fighting their way through crystal vampires, eventually reaching Diane's chamber where they are confronted by the Queen of Ice herself.

As they were about to duel, Caroline intervened, upset that they couldn't settle their differences peacefully. Diane was amused at the idea of humans and vampires compromising, though this didn't stop her from fighting the hunters, transforming into her true form. After the hunters defeated her, Diane reverted back to her human form, telling Caroline that she considers humans and vampires living together a possibility and finally says farewell to her beloved vampire before succumbing to her wounds, causing her chamber to collapse.

Diane's powers consists of creating illusions of herself and hydrokinesis, the ability control and manipulate water, creating deadly ice crystals in the form of orbs, arrows and chakrams.

Diane's true form is not a result of her vampire blood, but rather the mermaid blood that courses through her veins, transforming her into a hideous mermaid (Diane's grotesque form is due to her sacrificing beauty for eternal life. Also, the fact is that although mermaids have a long lifespan, it is nothing compared to that of a vampire). In this form, Diane is able to swim in water, as well as manipulate it by creating water vortexes and ice crystals as projectile weapons. Diane's weak point is her upper torso, although she cannot be harmed while she is submerged in water. 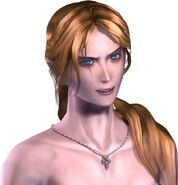 A close-up of Diane's face.
Add a photo to this gallery

Diane's bio from page 7 of the Vampire Night Perfect Guide.
Add a photo to this gallery
Retrieved from "https://thehouseofthedead.fandom.com/wiki/Diane?oldid=33611"
Community content is available under CC-BY-SA unless otherwise noted.