The esteemed inventor of the BioReactor, Curien was obsessed with scientifically controlling life and death to cure his terminally-ill son Daniel. Curien's research produced hostile creatures and two genes, Magician and Wheel of Fate, to "change the future". He was abandoned by DBR personnel and went insane.

At his mansion in 1998, Curien tried weaponizing the creatures to destroy humanity. He was killed by Magician and resurrected as Wheel of Fate 21 years later in the EFI Research Facility, where a now-cured Daniel and other survivors defeated him.

Dr. Curien was born on June 11, 1947.[1] Hailing from a noble family, he lived with his son Daniel in a medieval-era mansion.[3] He was involved with an organization that was established in 1880 by his ancestors, alongside those of financial group affiliate Caleb Goldman and a mysterious man named Thornheart.[4]

For an unknown period of time, Curien served as research director of the DBR Corporation, inventing the BioReactor. His aggressive leadership was praised among staff, including Sophie Richards, the then fiancée of AMS agent Thomas Rogan.[3] Curien and Rogan had met several times.[5]

When Daniel contracted a terminal illness, Curien was willing to go to extreme measures in order to save his life.[6] His research became focused on removing the barrier between life and death.[7] Goldman provided funding.[8]

Among Curien's results were three genes - one which cured Daniel, and two more named Magician and Wheel of Fate.[7][12] The former could be controlled by Curien at will, but an unknown individual changed its programming.[13] By this point, however, Curien had gone insane; he sought to destroy humanity and civilization.[14][15]

On October 17, 1998, several DBR personnel were reported missing at the Curien Mansion; because of government involvement, these news were not made public.[9] Two months later, on December 18, contact was lost with a special operatives team who investigated the mansion.[16]

On December 20, the AMS sent Rogan and his partner G to investigate the disappearances and a panicked phone message left by Sophie.[17] They arrived at the mansion to find it overrun by Curien's creatures, which he had deliberately released to slaughter DBR researchers. The agents battled the creatures and eventually confronted Curien in his underground laboratory. Boasting that he would never be defeated, Curien activated his "masterpiece", Magician. However, Magician refused to obey his orders and killed him, before being destroyed by the agents.[18]

Sometime after his death, Curien was brought to the EFI Research Facility. He underwent a nineteen-year resurrection process to be reborn as Wheel of Fate. By 2019, civilization had collapsed following Goldman and Thornheart's incidents. A now-cured Daniel watched his father's transformation during his residency in the facility. Disgusted by his father's crimes, Daniel teamed with the retired AMS agents investigating the facility to stop Wheel of Fate.

Wheel of Fate, awakened prematurely after Daniel hacked its program, addressed itself as Curien and vowed to "destroy and resurrect everything"; upon defeat, he pleaded forgiveness. Daniel, refusing to recognize the being as his father, opening fire alongside Thomas Rogan's daughter Lisa and destroyed him.

At first, Curien was a dedicated father who desperately wanted to save his son's life, even if it required venturing into "forbidden territory". His discovery of the genes that would change the future of humankind, along with staff walkouts, transformed him into a homicidal sociopath. He was concerned only with mankind's destruction and Magician's completion. Curien treated Rogan and G's struggles as if they were nothing more than a game, and was boastful that he could never be defeated.

When restored as Wheel of Fate, Curien vowed to destroy and resurrect humanity. Upon defeat, he pleaded to Daniel that he needed him; Daniel destroyed the creature, proclaiming that the creature is not his father.

In The House of the Dead III's Time Attack mode, Curien encourages the player to do better and compliments them on their performance, but expresses sympathy for his dead creatures.

Dr. Curien was conceived as a character named Mr. Happy, who was scrapped because he resembled the titular character from the 1993 science fiction horror film The Invisible Man. Sega AM1 settled on a more "humane" appearance that changed little in development. Curien was named differently at first; The House of the Dead game designer Hiroyuki Taguchi has referred to this iteration as "Dr. A" because he does not know how to spell the original name.[22]

In one scrapped ending for The House of the Dead, Curien felt guilty for his actions and hugged Magician, who self-destructed.[23][excerpt 1]

In The House of the Dead III, the "Dr. A" concept art appears as a portrait in the EFI Genome Ward stage.[24] 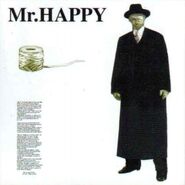 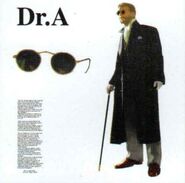 A further developed concept of Curien, who was named Dr. A in development. This artwork appears in manuals for home ports, as well as the EFI Genome Ward stage in The House of the Dead III.
Add a photo to this gallery

Curien in the attract mode, overseeing development of Magician.

Curien observing Magician in the BioReactor.

Curien taunting Rogan and G in a cultivation dome.

Curien dying, after Magician kills him.
Add a photo to this gallery

Pencil sketch of Curien, along with sketches of his son Daniel's face for comparison.
Add a photo to this gallery 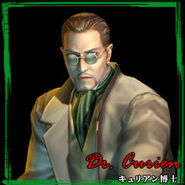 Curien as depicted in III

Curien's bio from page 63 of The House of the Dead III Perfect Guide.

Curien in character tree diagram from page 69.
Add a photo to this gallery

Curien's model in THOD III
Add a photo to this gallery

Curien's monument.
Add a photo to this gallery 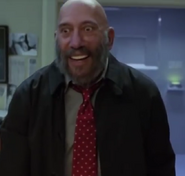 Professor Roy Curien, as portrayed by Sid Haig in the movie House of the Dead 2.

Curien from SEGA Heroes.
Add a photo to this gallery

Retrieved from "https://thehouseofthedead.fandom.com/wiki/Dr._Curien?oldid=33787"
Community content is available under CC-BY-SA unless otherwise noted.