Type E-2, named Drake (ドレイク, Doreiku?), is a short-sized, male humanoid creature who dual wields knives. He is an enemy in The House of the Dead, its 2021 remake, and House of the Dead: Scarlet Dawn.

Drake utilizes projectiles and nimble movements in combat. He is often paired with Rubin, a similar creature.

Drake wears a suit and hat. His face is muscular, his teeth are visible, and his eye sockets are empty.

As with Rubin, Drake is a short, nimble creature who can be a difficult target to hit. Drake throws his daggers as projectiles. He either drops down from the air to attack, or rolls toward players for a lunging bite.

Drake can take many body shots before dying, and can even survive headless at times. Shooting him during his attacks will cause Drake to fall backwards, buying players extra time to inflict damage. 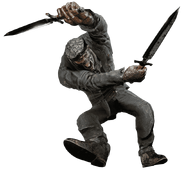