The Wiki of the Dead
Register
Don't have an account?
Sign In
Advertisement
in: Bosses, Animal Bosses, The House of the Dead III bosses

What is this place... some sort of feeding ground?

Type-0028, codenamed "Fool" (フール, Fūru?), was a sloth-like creature. Depending on the routes taken, it is the boss of either the second, third, or fourth chapter in The House of the Dead III.

Encountered in the EFI Genome Ward (or DBR Institute, again determined by the paths taken by the player), Fool lived in a cage and fed on human corpses. In combat, it boasted expert climbing skills. Its weak points were its four paws.

Created at the EFI Research Facility, Fool resided within a giant cage and fed on human corpses.

In 2019, Lisa Rogan and G broke into the facility to find Thomas Rogan, who had gone missing two weeks earlier. During their mission, the two were locked in Fool's cage. They ultimately killed the creature, which stumbled, lost its grip and fell into the abyss below.

Despite being a sloth, Fool is agile, using its elongated claws to grasp its cage and slash victims. It lives on a diet of flesh and blood, and can rattle its cage to drop human corpses on its prey. The creature's paws are vulnerable to damage; shooting them causes Fool to lose its grip and briefly stop attacking.

Fast and accurate shooting is needed in order to evade Fool's attacks. The creature climbs the inside of its cage in pursuit of the player(s), initially taking little damage when shot anywhere but its claws. Fool repeats several attack phases in quick succession, dropping corpses from above in between. At low health, its whole body is vulnerable to gunfire. 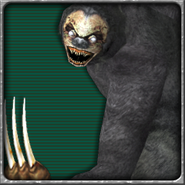 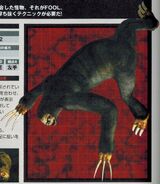 Fool in the Famitsu The House of the Dead III Perfect Guide. 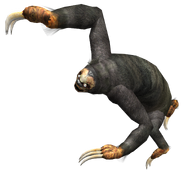