The Wiki of the Dead
Register
Don't have an account?
Sign In
Advertisement
in: Pages needing references, Bosses, Insectoid Bosses, The House of the Dead bosses

Created by genetic engineer Dr. Curien, Hermit used its legs offensively and defensively while firing web-like projectiles. Its weak point was its head.

Like the rest of the creatures brought to life in Dr. Curien's mansion, Hermit was incubated inside the BioReactor, a DNA-editing machine, before being unleashed. Alongside Chariot, Hangedman, and Magician, Hermit was considered a "perfect" creation.

Hermit is an armored foe who has various methods to make shooting its weak point difficult: it can cover its head with its invulnerable talons, launch barrages of web ball projectiles, and sometimes move and attack upside down. Good accuracy and well-timed shots are critical to catching Hermit when its guard is lowered. 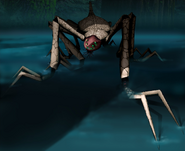 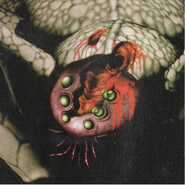 Hermit's character model from The House of the Dead 2's attract mode.

Hermit as seen in The House of the Dead III's opening sequence.
Community content is available under CC-BY-SA unless otherwise noted.
Advertisement