The Wiki of the Dead
Register
Don't have an account?
Sign In
Advertisement
in: Bosses, The House of the Dead 2 bosses

Type-B 05, codenamed "Hierophant" (ハイエロファント, Haierofanto?), was an ichthyoid creature. It is the second boss of The House of the Dead 2.

A fish-like being, Hierophant battled with a trident and schools of Mofish. Its weak point was the heart within its opening and closing ribcage.

Hierophant is a scaly creature with sharp teeth, gills, and a long tail. Its body is covered with barnacles. On either land or water, it can gouge the players with its trident, summon Mofish, and leap into the air for a pounce attack. The creature's ribcage opens and closes, exposing its heart for damage.

Hierophant was derived from geneticist Dr. Curien's mad research; after Curien's death in the 1998 Curien Mansion incident, his financier Caleb Goldman developed Hierophant and other creatures for the next two years. Goldman released them upon a large, unnamed city on February 26th, 2000, scheming to decimate humanity and preserve the life cycle.

AMS dispatched agents to investigate, including James Taylor and Gary Stewart. Both agreed to meet partners Amy Crystal and Harry Harris at Sunset Bridge. On their way there, a live news helicopter captured Hierophant's massacre.

Upon reaching the bridge or the docks (depending on the player's route through the second chapter), the party was ambushed by Hierophant. James and Gary defeated the creature; its corpse fell into the water, floating on the surface.

Later, as they drove to Goldman's headquarters, Hierophant ambushed James and Gary on a bridge; it was killed once more.

Goldman's final creation, Emperor, could shape-shift into most of the game's bosses; among its transformations was Hierophant, which performed its pounce attack.

Hierophant is a boss that can be fought in two locations: Sunset Bridge or the wharf. While its attacks slightly differ depending on where it is battled, its phases are fought in the same consecutive order. The creature begins as a slow moving, easy adversary, its heart revealed through its open rib cage. However, as the fight continues, the creature summons Mofish to its aid and, when all of these have been defeated, resorts to leaping out of the water repeatedly in multiple attempts to impale the player.

Keeping the target on Hierophant's weak point will ensure its defeat. The creature is fought again on the bridge in Chapter 5, but will be weaker and does not summon Mofish.

Hierophant is also the second boss in The Pinball of the Dead. Like in 2, its chest opens and closes throughout the fight. Periodically, Hierophant will leap at the screen, resulting in groups of Mofish falling and the screen shaking.

The player(s) must successfully perform a single, accurate shot to Hierophant’s exposed heart each time it’s in the air. If the player aims correctly, Hierophant will fall to the ground, before quickly getting up. Hierophant must be shot at least 3 times in mid-air for it to be defeated, thus ending the final phase.

Hierophant alongside Emperor and other bosses in Boss Mode. 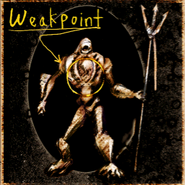 Hierophant in The Pinball of the Dead. 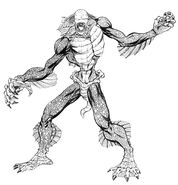