The Wiki of the Dead
Register
Don't have an account?
Sign In
Advertisement
in: Article stubs, Miscellaneous

Hiiro Sumomo (緋色すもも, Hiiro sumomo?), or Momo for short,[1] was a virtual YouTuber planned and produced by Darkness Co., Ltd[2] for House of the Dead: Scarlet Dawn's marketing campaign. The character was a female version of Kageo, a recurring creature in the main House of the Dead video game series.

From 2018 to 2020, Sumomo shared Scarlet Dawn-related news, artwork, and videos on Twitter and YouTube. Upon launch, her YouTube channel amassed over 27,000 subscribers in the span of three weeks,[1] and overall had 1.4 million views.[2][3] She also appeared on print-out masks, the booklet for the album HOUSE OF THE DEAD ~SCARLET DAWN~ ORIGINAL SOUND TRACKS, and other promotional materials and merchandise.

Sumomo's social media accounts went defunct on September 9th, 2020, nine days before the two-year anniversary of her debut.[4] Her Twitter account now functions as an archive for older posts, while her YouTube channel was deleted. Many of her videos have been reuploaded to Internet Archive and the Chinese video sharing site Bilibili. 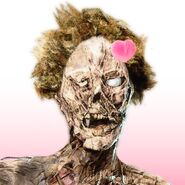