This is state of the art horror.

Set between The House of the Dead 4 and III, Scarlet Dawn follows AMS agents Kate Green and Ryan Taylor as they investigate the owner of Scarecrow Manor, who plans to release biologically-engineered creatures upon the world.

Sega and director Takashi Oda revisited the mainline House of the Dead series after production of a fifth game was shelved in 2012.[1] Scarlet Dawn ended a 12-year hiatus on the series; it was marketed as "the most eagerly anticipated sequel in arcade game history".[2] The game was built on Unreal Engine 4 with graphics provided by Agni-Flare.[3][4]

Scarlet Dawn was released in Japan on the 22nd anniversary of the original House of the Dead's launch, and internationally a month later. The game was adapted into a video slot machine and a spin-off ride named House of the Dead-Scarlet Dawn-THE ATTRACTION.

On December 6, 2006, AMS agents Kate Green and the late James Taylor's brother Ryan are dispatched to Scarecrow Manor for an undercover investigation dubbed "Code R". At a dinner service, the owner and host unleashes hordes of biologically-engineered creatures upon guests; the agents fight to safety. Kate uses her PDA to call an unmanned helicopter, but it crashes and the building collapses.

Escaping with no backup available, Kate and Ryan explore the manor. They battle the armored Chariot in the annex, the squid-like High Priestess in a laboratory, and the winged Hangedman after taking a path through the elevator lobby. During the mission, Ryan worries that he will join his brother in death.

Kate identifies the owner as Thornheart, a man previously thought to have died from an illness, and reveals that "Code R" is his mysterious "Noah's Ark" project. The agents discover that he was connected to bioterrorists Dr. Curien and Caleb Goldman. In 1880, the trio's ancestors founded an unknown organization; it was the catalyst for various incidents that were previously investigated by the AMS.

Kate and Ryan fight through a church to confront Thornheart, who reveals that the purpose of "Noah's Ark" is "new life to be born in a new evolution". He releases his masterpiece, Moon, who is impervious to gunfire and constantly grows. When all seems hopeless, Ryan impales Moon's head with a metal rod, which kills the creature when struck by lightning. Kate then tells Ryan she believes this was James' divine intervention. With the threat neutralized, Kate and Ryan leave Scarecrow Manor as the sun rises.[5][6]

Depending on the player's performance, one of four endings will play after the credits; the words "To be continued in the next HOUSE OF THE DEAD" appear afterwards.

The criteria for getting each ending differs from Scarlet Dawn's Japanese arcade version to the US/European version; these differences are noted below.

House of the Dead: Scarlet Dawn is a rail shooter set from a first-person perspective. Players shoot and kill attacking enemies with a H&K MP7-like machine gun controller. Unlike previous games in the series, the guns now automatically reload once empty, though the standard "shake to reload" mechanic is still available.

Player health is measured by lives, which are red and blue flame icons; damage from an enemy or failing a certain sequence deducts one life. There are first-aid kits hidden in destructable background objects that restore one life. Performing well in a chapter (good accuracy, high headshot count, and other factors) yields bonus lives for high grades. Destroying parts of the environment may also reveal special items that award score bonuses.

The game is comprised of a prologue chapter, three middle chapters that can be selected in any order, and a final chapter once all have been completed. Chariot and Hangedman's chapters have branching paths that are triggered either by player action (failing to shoot a drawbridge, as in Hangedman's chapter) or the number of lives remaining (the elevators in Chariot's chapter).

At any point in the game, creatures may overwhelm and push a player to the ground. The surrounding creatures must be killed within a time limit; otherwise, the player loses a life. Creatures may also target one individual partner, resulting in the other having to rescue them. Failure to do so in the time limit results in a life penalty, or in a multiplayer game, a life penalty to the downed player. This is a modified version of the mechanic used in The House of the Dead III.

The scoring system for the game has also been tweaked. The ranks are based on 5 categories: Score, Enemies killed, Critical Shots, Accuracy, and Events. A minimum of 4 "Perfect" ratings and 1 "Excellent" rating are required to receive an S rank on each stage. At the end of the game, the player's final rank will be calculated based on the ranks on every stage. The better the player performs, the higher their final rating will be. Just like previous installments, the player's performance will determine the game's ending.

The Japanese and International versions each have different game modes:

Throughout the game, there are "Events" in which the player must shoot a target reticle on a creature or object within a short time. Completion of Events is recorded in the player's end-of-stage ranking. Events include:

Another new mechanic to the series is HOD Coins and the Item Shop. Killing the enemies with a critical shot, obtaining collectible items, saving civilians and completing the QTE will reward the player with HOD Coins. The player can use these coins to purchase items in the Item Shop at the beginning of each level. Up to two items can be bought per stage. The player can switch between items by pressing either the side buttons or the secondary trigger of the gun. The amount of uses for each item is limited and they cannot be replenished until the player completes the stage or by using a credit after losing all of their lives. The items are as follows:

Another new mechanic to the series is Aime Accessibility. By using Aime cards, the player can store their progress, keep their collected HOD Coins, check their highest scores, complete achievements, and partake in nationwide leaderboards. A level system was also added to the game as part of the Aime features. By beating the stages, the players will receive XP. Once the bar filled up, the player will level up and will be rewarded with HOD Coins. However, this feature is Japanese-exclusive and is not available for the International release.

The International version receives major changes to the game. First, the game's modes have been changed. Aime Accessibility and HOD Coins were also removed altogether, as a result, the player will no longer worry about the purchases in the Item Shop, as the player can choose the items as they wish. In addition, the criteria of the game's endings have been tweaked.

Scarlet Dawn is divided into 5 chapters. Chapter 0 is a prologue, which can be skipped in the International version.

4. A Glimmer of Hope

Chapters 1, 2, and 3 take place in one of three player-selected areas: 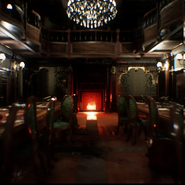 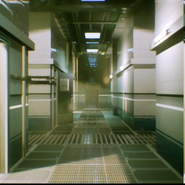 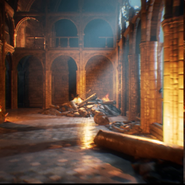 Main article: List of creatures in House of the Dead: Scarlet Dawn

Shelved House of the Dead 5 project

Sometime that year, development began on a fifth game under the working title The House of the Dead 5. However, the project was shelved due to being technologically ambitious and costly, with only the creatures and the introductory part of the story being completed. There exists a production script dated March 26, 2012, but its contents have not been made public.[9]

Oda considers the scrapped House of the Dead 5 project a sixth "phantom" entry in the series,[9] but has denied plans to revive it and wants to focus on future titles instead.[10]

The project was redeveloped as House of the Dead: Scarlet Dawn. The name was chosen to appeal more to new players, although Oda maintains that it is still the fifth game in the series.[9] The game was built on Unreal Engine 4 and runs on the PC-based Sega ALLS arcade hardware.[11][3]

A company named Agni Flare handled Scarlet Dawn's graphics.[3][4] President of Agni Flare Takeshi Inaba and art director Nobuhito Iwao were previously involved with The House of the Dead 4. The human characters were played by English motion-captured actors, with translators helping them communicate with the Japanese developers. Gore effects, in which creatures showed burn marks and skeletal framework, were prototyped but ultimately scrapped.[12]

Preliminary location tests were held in multiple Japanese arcades, including the SEGA Akihabara Building 3 in Tokyo, Japan from January 19 to the 21st; Round One Arcade in Yokohama from March 3rd to March 5th; and Rakuichi Rakuzen Arcade in Kawaguichi from March 16th to March 18th.[15][16][11][13] Players were polled over interest in a console port of Scarlet Dawn.[17] On July 9th 2018, another location test with more content was held in three places: High-tech Land Sega in Shibuya, Sega Tokyo Dome City, and Sega Shinjuku Kabukicho.[11]

During the 2018 iteration of the JAEPO amusement expo in Japan, Sega released an official trailer revealing new scenes and a glimpse at a new boss, High Priestess (or simply Priestess in the Japanese version).[18]

Sega confirmed a Western release of Scarlet Dawn on May 31, 2018.[19] Kevin Bachus, the Senior Vice President of the American restaurant and video arcade chain Dave & Busters, announced that all locations would receive Scarlet Dawn cabinets that fall.[20][21] The game was also distributed to all Round One arcade locations, including those in the United States.[22] However, Sega stressed that Scarlet Dawn is not an exclusive release.[3]

In September 2019, Sega and Universal Space announced an exclusive Chinese version of the game. The game, now renamed as Haunted House: Scarlet Dawn, features the same mechanics as the Global version, with several changes, such as UI changes and Chinese subtitles. A Korean version of the game was also spotted.[25]

As promotion of JAEPO 2020, Scarlet Dawn was included in a music video featuring Sega's current arcade lineup.[26] The lyrics and singing were by Nijiiro Samurai.[27]

On July 31, 2020, Sega announced a partnership with Univest Capital Inc to allow arcade operators to "get zero per cent APR for 36 months on top of the 90 days deferred payments" on Scarlet Dawn, as well as Transformers: Shadows Rising.[28]

Scarlet Dawn was adapted into a video slot machine, House of the Dead: Scarlet Dawn - Battle Genesis, in 2019.[29]

A ride with recycled elements from the game, titled House of the Dead-Scarlet Dawn-THE ATTRACTION, was scheduled to debut at the Joypolis entertainment center in Tokyo, Japan on March 19, 2020,[30] but was delayed to June 13 due to the 2019-20 coronavirus pandemic.[31]

Chris Plante of Polygon felt Scarlet Dawn's gameplay was thrilling, but criticized the scripted boss battles and "janky" character animations. He also stated that the voice acting "rivals some of the worst [he's] ever heard [in] the past decade", but wondered if it was done intentionally. Plante concluded that the game "lovingly echoes a long-gone era when horror directors would go to absurd lengths just to add a little extra fun".[32]

Phantawit Sukjaidee of the Thai gaming blog Gamerism.co was more critical of Scarlet Dawn, taking issue with the auto-reload mechanic, frame rate drops, frustrating difficulty, low cabinet audio and missing subtitles, and anticlimactic final boss. However, he praised the designs of the player guns and cabinet, particularly the latter's seat vibration effect. He concluded that Scarlet Dawn is "fair", yet inferior to previous House of the Dead games.[33]

Takashi Oda desires to make three more games in the House of the Dead series.[10] He has stated that he would like to give players more freedom in movement; if there is enough demand, he wants to develop a House of the Dead first person shooter.[10]

Teaser image. The Japanese text roughly translates to "This is the first day of fear".

Retrieved from "https://thehouseofthedead.fandom.com/wiki/House_of_the_Dead:_Scarlet_Dawn?oldid=28285"
Community content is available under CC-BY-SA unless otherwise noted.