House of the Dead (film)

The film follows a group of college students who attend an island rave party, only to discover that it is infested with zombies. As they fight for survival, the students uncover the island's dark past.

House of the Dead was panned by critics for its story, acting, cinematography, and unfaithfulness to the source material. It is often regarded as one of the worst video game film adaptations of all time. The film was also a box office bomb, grossing $13.8 million against a budget of $12 million.

A sequel directed by Michael Hurst, House of the Dead 2, was released in 2005 without Boll's involvement.

College students Simon and Greg book a boat trip to an island rave party at Isla del Morte, an island located off the coast of Seattle, Washington. Joining them are Simon's crush Alicia, Karma (who has a crush on Simon), and Greg's girlfriend Cynthia. They discover that their boat has already left for the island; Simon pays Captain Victor Kirk (Jürgen Prochnow) and his first mate Salish (Clint Howard) to transport them. Police officer Jordan Casper (Ellie Cornell), who is aware that Kirk is a smuggler, fails to stop the group from leaving.

Later, Rudy and Alicia are seen being rescued by a team of federal agents. Rudy reveals that his last name is Curien. The ending narration reveals that Rudy gave Alicia the mutated blood and that is why she is alive, thinking to himself, "God, ain't love a bitch?"

DreamWorks bought the rights to The House of the Dead from Sega in 1998. The project was to be the directorial debut of Jesse Dylan, the son of singer-songwriter Bob Dylan. The story, penned by Dylan and writer Mark Verheiden, took place in a small college town where zombies are "the hippest and most popular kids in school". After the deaths of their friends, a woman named Jenny and "a group of nerdy 'necro-warriors'" seek revenge.[2] The project never materialized and DreamWorks lost the rights.[3]

Production company Mindfire Entertainment bought the option from DreamWorks.[4] They were inspired by Dan Kletzky, President of Entertainment Licensing Associates, to produce video game film adaptations. Producer and writer Mark Altman admired the House of the Dead series' "cinematic" nature and simple narrative, which allowed more creative freedom. The goal was to make a "scary" zombie movie with marquee value, using new elements in addition to some from the video games.[3]

According to Altman, Sega was "really excited" by Mindfire's previous work and their approach to the source material, and arranged for Japanese representatives to meet the team and contribute ideas.[3]

German filmmaker Uwe Boll was attached as director, with House of the Dead ultimately convincing him to make more video game film adaptations.[5] He considered the film a prequel to the House of the Dead video game series because "it shows how Curien is developing into a bad guy".[6]

Jürgen Prochnow, Will Sanderson, and Clint Howard were cast as Boll had known them for "a long time".[6] Prochnow played Captain Victor Kirk as a homage to his role as the U-boat commander in Das Boot.[4] Boll complimented Prochnow for "[playing] a scene 10 times perfect, always [being] on his marks". Howard had roles in Boll's previous films Backwoods and Heart of America, while Jonathan Cherry had acted in the then-recent film Final Destination 2.[6]

Ellie Cornell, who plays Jordan Casper, was friends with Mark Altman. Boll remarked "She is so great, perfect timing, very disciplined and great with guns".[6] Cornell, who had to be trained to perform stunts, liked her character: "She was tough, she was a fighter."[7] The role of Cynthia was then-beginning actress Sonya Salomaa's first lead in a feature. She enjoyed becoming close friends with the other actors and stated that Boll "was definitely a man of very few words, but you certainly knew if he wasn't happy with a take!"[8]

Filming in Vancouver commenced on May 8, 2002.[3] The shoot was marred by rain, freezing water temperatures, and a burn injury Cherry sustained on the second day, which required the bridge scene (where his character hurts his hand) to be shot later in order to explain the bandage he had to wear.[6] A bullet also smashed the middle of a camera lens; the team liked the shot and kept it in the film.[4]

Reportedly, Sega planned to develop a light gun video game adaptation of the film. The Hollywood Reporter described it as separate from the then-upcoming The House of the Dead III, developed "in close cooperation with the filmmakers", and possibly using the voices and likenesses of the film's actors. The House of the Dead development team WOW Entertainment visited the island set to take photos for reference in development.[9] The game was never released, though the film was still promoted in III's Xbox port and Japanese guidebook.

An official website, HouseoftheDeadMovie.com, was launched to promote the film. The Motion Picture Association of America (MPAA) ordered Artisan Entertainment and the filmmakers to take it down due to the "extremely gory" stills.[10]

House of the Dead was panned by critics. On Metacritic, the film holds a 15/100, meaning “overwhelming dislike”.[11] On Rotten Tomatoes, the film has an approval rating of 3% based on 61 reviews, with an average rating of 2.55/10. The site's consensus reads, "A grungy, disjointed, mostly brainless mess of a film, House of the Dead is nonetheless loaded with unintentional laughs."[12] As of October 31, 2020, the film ranks #71 among the site's worst rated films of all time.[13]

IGN Movies, however, gave the film three out of five stars, citing it as "an unabashed B-movie that does an incredibly decent job with a limited budget, unknown cast, and routine storyline."

In 2009, Time Magazine listed the film on their list of top ten worst video game movies.[14] 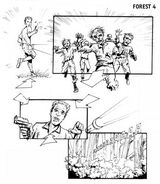 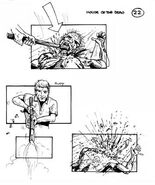