I'll go on fighting. As long as we have the will to live.

James Taylor (ジェームス・テイラー, Jēmusu Teirā?) was a special agent of the now-defunct American government organization AMS. During his career, he investigated two incidents masterminded by businessman Caleb Goldman involving biologically-engineered creatures. He was the brother of Ryan Taylor.

James Taylor was approximately born in 1965.[1] As an AMS special agent, he was known for having a calm composure and a "computer-like" mind.[1] He was often worried by rookie agent Gary Stewart's recklessness.[2] His brother, Ryan, respected him.[3]

On February 26, 2000, an outbreak of creatures hit an unnamed city; James and his partner, Gary Stewart, were sent by the AMS to neutralize the threat. After defeating the enormous Judgment and fish-like Hierophant, they met up with fellow AMS agents Harry Harris and Amy Crystal.

The group learned that the perpetrator was Caleb Goldman, the wealthy financier of Dr. Curien's research that resulted in the "Curien Mansion incident" four years prior. After Curien's death, Goldman used his work to organize the citywide attack. He left the agents a phone message, inviting them to a meeting at the Colosseum on the city's north side.

Fearing a trap, the group split up; James and Gary ventured underground, defeating the large multi-headed, snake-like beast Tower. They arrived to find Goldman taunting them on a screen, with Amy and an injured Harry trapped by Strength, an undead chainsaw-wielding beast. After defeating Strength, Harry gave the agents the key to a car so they can travel to Goldman's headquarters.

On the drive there, James and Gary encountered Judgment and Hierophant again. Arriving at Goldman's headquarters, the agents fought a revived Magician. They finally confronted Goldman, who calmly explained his actions and unleashed his greatest creation: Emperor, a being meant to rule over humanity. James and Gary managed to defeat Emperor after a long fight.

Telling the agents that "in time, a successor will come," Goldman committed suicide by jumping off the roof of the building. When asked by Gary if they did the right thing, James was unsure, declaring that they must "find the answer by [themselves]". He bid Goldman farewell and left the building.

Three years later, James and new AMS agent Kate Green were trapped in fifth basement floor of the agency's European office branch following a sudden earthquake. James, still thinking about the "2000 Goldman Case", believed that the ordeal had not yet ended.

While waiting for backup to arrive, James' PDA went off, and swarms of creatures appeared on the security cameras. The pair gathered all the weaponry they could find and escaped. Travelling to the sewers, they battled the four-armed Justice and a pair of mutant tarantulas known as the Lovers.

In a Classified Information Room, James and Kate uncovered a plot to fire nuclear missiles worldwide within 24 hours' time. Taking the subway to an underground shopping district, they defeated a double-ended chainsaw-wielding assassin, the Empress. Arriving at the surface, they battled the obese, nearly impervious Temperance.

James and Kate found the city to be completely obliterated. The former received a PDA message from Goldman, who was responsible for the infestation; the nuclear missile launch was to occur in one hour. The agents set out for the abandoned Goldman Building. James was wounded after a battle with the Star, a levitating humanoid, but he and Kate managed to halt the missile launch.

In a prerecorded message, Goldman claimed his intention of reverting humankind to its "original state" in order to prevent them from harming the planet any father. As such, his final legacy, the World, was released in the opening of "Pandora's Box" to fulfill its role as the successor to his original Emperor project in 2000, having developed underground since his death. Noticing that the World continued getting larger and stronger each time it died, James set his PDA to self-destruct; telling Kate not to give up hope, he sacrificed himself, destroying the World in the following explosion at the cost of his life.

James mentioned by G in one of the endings when he visits Goldman's office.

Since James' death, Kate has vowed to never give up hope, and has referred to his parting words multiple times. She has also described him as "someone dear to [her]".[4]

In 2006, Ryan became an AMS agent and partnered with Kate to learn about James' work.[3] During an investigation of Scarecrow Manor, Ryan expressed fears that he would join his brother in death. After Ryan impaled the Moon, a massive creature, it was struck by lightning; Kate believed that this was James' devine intervention. Ryan also stated that he is tired of "people close to [me]" becoming victims, to which Kate reminded him of a saying from James: "No sacrifices anymore. It's too late for regrets. Something like that."

In The House of the Dead 2, James has short black hair in a brown shade. He wears a light gray formal suit jacket and pants, a white long-sleeved button shirt, a gray-silver neck tie, and black shoes. In the spinoff Typing of the Dead, James gains a laptop with a large yellow travel backpack; he kills zombies by typing words beneath them.

In The House of the Dead 4, James' hair is pale brown, cut shorter, and spiked. He wears a long gray trenchcoat with a large collar and matching pinstripped pants in a shades of gray, a black long-sleeved collared shirt in an extended collar, and brown shoes.

During a flashback to the second game, James wears his classic grey formal suit. His hair is dark brown with a half fringe on the left side. 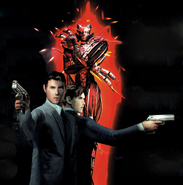 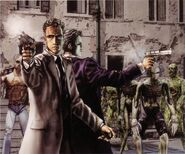 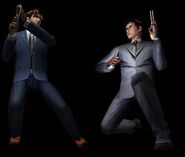 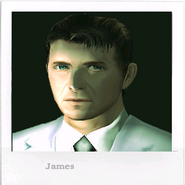 James' photo texture from ranking screens.
Add a photo to this gallery

After defeating the Emperor, James vows to keep on fighting.

James House of the Dead 4 Artwork. 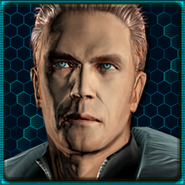 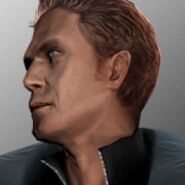 James PlayStation Network avatar.
Add a photo to this gallery

James and Kate in Basement 5F of the AMS Branch Office.

James entering the AMS Branch Office in a flashback.

James and Kate preparing to fight creatures in the subway.

James and Kate after defeating the Empress.

James recieving a message on his PDA from Caleb Goldman. 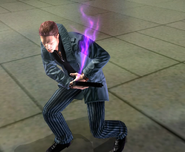 James after being injured by the Star.

James and Gary confronting Goldman in a flashback to The House of the Dead 2.

James encouraging Kate to never give up hope, seconds before he sacrifices himself to destroy the World.
Add a photo to this gallery

James having several random items being thrown at him.

James chasing a Max creature with a chainsaw.
Add a photo to this gallery

Retrieved from "https://thehouseofthedead.fandom.com/wiki/James_Taylor?oldid=24389"
Community content is available under CC-BY-SA unless otherwise noted.