The Wiki of the Dead
Register
Don't have an account?
Sign In
Advertisement
in: Bosses, The House of the Dead 2 bosses

Zeal and Kuarl worked together in combat; the former flew erratically to ram into opponents while the latter, sporting impenetrable armor, attacked with a massive axe. The duo's weak point was Zeal.

Kuarl is a headless, armored giant with a massive, bloodied ax. Spikes protrude from its shoulders, wrists and knees. Defying logic, Kuarl can be heard moaning even though it lacks a mouth. The creature will lumber forward, raise its axe, and (with Zeal's cry of "Go, Kuarl!") hack at the player(s).

Like Hangedman from The House of the Dead, Zeal is a bat-human hybrid that speaks in a high-pitched voice; in contrast, Zeal is smaller and wears spiked armor similar to Kuarl's.

Being Judgment's weak point, Zeal's flight makes him an evasive target; both Kuarl and Zeal recoil if the latter is damaged. When Judgement is at low health, Kuarl dies, and Zeal will fly directly at players to attack.

Judgment was derived from geneticist Dr. Curien's mad research; after Curien's death in the 1998 Curien Mansion Incident, his financier Caleb Goldman developed Judgment and other creatures over the next two years. Goldman released them in a large, unnamed city on February 26th, 2000, scheming to decimate humanity and preserve the life cycle.

AMS dispatched agents to investigate. One of them, G, planned to meet partners James Taylor and Gary Stewart in a library, but was injured by Judgment. James and Gary confronted Zeal while driving, but the creature flew away. Later, Zeal appeared again, with Kuarl emerging by smashing two cars aside. Using the files given to them by G, James and Gary defeated Judgment; Zeal uttered Goldman's name before dying.

The agents encountered Judgment again while travelling to Goldman's headquarters; Zeal claimed Goldman gave them a "second chance." They were once more defeated.

Goldman's final creation, Emperor, could shape-shift into most of the game's bosses; among its transformations was Zeal, attempting to ram players.

Judgment is the first boss in The Pinball of the Dead. Like in 2, this is a two-part fight. First, the player must attack Zeal while Kuarl moves around the screen, often protecting him. After several hits, Kuarl dies; Zeal will then move quickly around the screen, making him a more difficult target than before.

Judgment is two bosses in one: Kuarl, who lumbers toward players to attack with his axe; and Zeal, the duo's weak point who flies in the background. The latter is an evasive target, flying at progressively faster speeds while using Kuarl's armored body for protection. Shooting Kuarl inflicts chip damage, but only damage to Zeal will make Kuarl recoil and disrupt any attack in progress. At low health, Kuarl dies and Zeal will fight the player alone.

The pair is fought again in the fifth chapter, but their behavior does not change.

These randomly-chosen attacks will continue until Zeal is killed.

In this spin-off, the player can only damage the boss through Zeal.

The first phase involves typing out the words/phrases shown under Zeal as he flies around the stage before Kuarl gets too close.

Once he does, they will be forced to take a hit with no way to cancel the ensuing attack.

For the second phase, they must do the same, only with Zeal's ramming; there is a 3 - 5 second break between attacks here for as long Zeal still has health.

"I've already taken care of G. This is only the beginning. You're next. [Flies away] Get him!"

"Sir Goldman has given me a second chance. Don't even think you can get past me. Go Kuarl!" 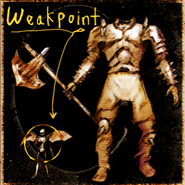 Judgment alongside the Emperor and other bosses in Boss Mode.

Judgment in an early version of the game, where they were separate entities named "Kuarl and Zeal". 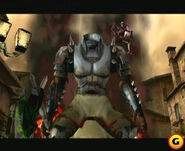 Judgment as seen in The House of the Dead III's opening sequence.

Judgment in The Pinball of the Dead.
Community content is available under CC-BY-SA unless otherwise noted.
Advertisement