After my experience with those gloppy [Ebitans], I decided to try out something a little drier for a change. So I cooked up this [Kageo] series, loosely based on a Japanese model that I ran across in a trade journal. They seem to favor humid spots, to keep from drying out, and they like to attack by biting. But then, who among us doesn't?

Type B-1, named Kageo (カゲオ, Kageo?), is a skeletal humanoid creature characterized by his low resilience and dry habitat. He is a recurring enemy throughout the main House of the Dead series.

Produced through human genome experimentation, Kageo was used by various parties to help carry out humanity-threatening worldwide incidents, beginning with Dr. Curien in 1998.

The House of the Dead/Remake

Kageo first appears in the Curien Mansion in the first House of the Dead game, originally with the name "Mummy". As stated in the Sega Saturn manual, Mummy was created by Curien sometime after that of Ebitan, as he wanted to "create something a little drier for a change". Mummy's structure was off a Japanese model Curien encountered at a trade journal, possibly revealing his extremely thin build was based off an anorexic human. The manual further explains that he wanders around damp areas to keep himself from drying out, explaining his preference for darker, hidden areas. True to his mummified appearance, his resilience is lower compared to the other creatures infesting the Curien Mansion.

In the remake, his skin is dark beige with some parts with green fungi. His ribs are thinner, along with the rest of his chest. Also, he got a lot of green mushrooms on his body right now.

Kageo appears again, having been recreated in numbers by Caleb Goldman to raid a large, unnamed city, this time with his official name being Kageo. Still with his relative fragility compared to the other creatures, he still prefers to prowl in dark and dreary areas, though this time his reasons behind this preference may be different from drying out. His build was used as a template by Goldman to create a stronger creature named Ken.

Kageo returns in this game. He usually attacks in smaller numbers rather than occur in hordes in comparison to his prolific numbers from past appearances.

The House of the Dead 4 and Special

Kageo appears in this series, with a similar build like that of the previous games. He appears to be an emaciated old man with bony features. Despite its appearance which shows it is not resilient, Kageos have a faster attack rate compared to other creatures. They also appear in a torso form, although this form appears only during Chapter 3. In this game, Kageo attacks by swiping or biting. But in addition, Kageo can also knock the player to the ground in order to step on him.

Kageo returns once more, this time having been recreated by Thornheart alongside several other creatures to attack his guests at the Scarecrow Manor. 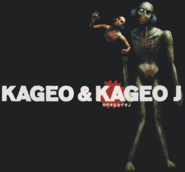 Two Kageos with a Bourbon in between them. 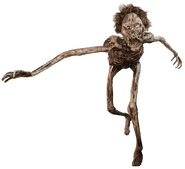