The Wiki of the Dead
Register
Don't have an account?
Sign In
Advertisement
in: Characters, Female characters, Playable characters,
and 5 more

Let's show them they've picked the wrong brains to eat!

Since her recruitment, Kate has worked with the brothers James and Ryan Taylor to combat worldwide incidents involving biologically-engineered creatures. Her skills improved over time and her experiences taught her to never give up hope.

In 2003, Kate, a newcomer AMS agent, was assigned as James Taylor's partner. While gathering intelligence at the agency's European branch office, an earthquake trapped them inside. Discovering swarms of creatures on the security cameras, Kate and James armed themselves with machine guns and escaped to the sewers.

Battling the four-armed Justice and The Lovers, a pair of mutated tarantulas, the AMS agents discovered a eminent nuclear missile launch. They took a subway train to the surface, killing The Empress, a chainsaw-wielding assassin, along the way. Both were unsure of the outbreak's source, though James suspected that events of the "events" three years earlier hadn't yet ended.

After defeating the hulking Temperance on the creature-infested streets and discovering the city in ruins, deceased businessman Caleb Goldman began an hour-long countdown to the missile launch via a message on James' PDA. Racing to Goldman's headquarters, Kate and James defeated The Star, but James was wounded; Kate supported him as they reached Goldman's office, successfully stopping the missiles in time.

Claiming that he merely wanted to revert humans to their "natural state" with the missile launch, Goldman unleashed The World, an insect-like humanoid meant to be a successor to Emperor. The creature grew larger and powerful with each defeat. James set his PDA to self-destruct, and, telling Kate to not "give up hope", sacrificed himself to destroy The World in the resulting explosion. Kate, distraught and confused of what she should do, left Goldman's building alone.

Search to find source of incident

Main article: The House of the Dead 4 Special

Now alone and saddened by James' death, Kate teamed up with AMS agent G to fight the infestation back to its source. After killing a revived Justice, the pair discovered a secret laboratory.

Inside, Magician — the final creation of Dr. Curien in 1998, which Goldman resurrected two years later — awoke and battled them. After defeating him, G told Kate that the fight "is about to begin". The two left the building.

After her prior missions, Kate was renowned for her courage and became one of the most popular agents of the AMS.[1]

On December 6th, 2006, Kate was dispatched for an undercover investigation of "Code R" at Scarecrow Manor, with James' brother Ryan joining her. After the owner unleashed creatures upon reception guests, the agents battled through the manor. Among the creatures they defeated were The Chariot[sic], The High Priestess, and The Hanged Man[sic]. Ryan feared that he would die like James.[2]

Kate and Ryan found evidence revealing that the owner, Thornheart, was affiliated with Goldman and Dr. Curien, and is devising a scheme named "Noah's Ark". The agents confronted Thornheart in a church, but he escaped as a massive creature, The Moon, emerged. Realizing that The Moon was impervious to gunfire, Ryan impaled it with a giant metal rod, causing the creature to be fatally zapped by lightning. Kate believed that this was James himself intervening from the dead.[2]

Shortly after, Ryan told Kate that he is tired of people close to him being victimized. Kate reminded him of James' motto: "No sacrifices anymore. It's too late for regrets. Something like that."[3]

Despite being a new member of the AMS, Kate is portrayed as capable of handling situations people would normally be afraid of. She is not afraid to speak her mind, as she is shown usually commenting on how dangerous her situation is or how disgusting the monsters she encounters are, yet she struggles to understand the circumstances she is in and what the word "hope" really means, indicating that she still has a lot to learn as an agent. It is implied that she is interested in fashion, in particular modelling, as she sometimes behaves and poses like a model. She also shown to be quite flirtatious, as she sometimes asks if the creatures "liked her that much" when grabbed.

James' death had a strong impact on her character; she becomes more independent and serious. She is still confused about what she's gotten herself into even after everything she's been through, but nonetheless, she displays a large amount of courage and optimism as the story progresses. She also shown to be a person that can cooperate easily, as she agrees to help G "fight back to the source" without hesitation.

In House of the Dead: Scarlet Dawn, she is shown to have taken the mindsets of more veteran agents, in particular James. She's shown to be a lot more brave, risking her life helping innocent civilians to safety even when fighting The Chariot. She also shown to have a high level of endurance, as she continues to fight The Chariot even after grabbed and choked by the latter. In addition, due to her being an AMS elite, she is shown to have a decent amount of knowledge of the history of the unknown organization which Thornheart was involved with. She's still not afraid to speak her mind, although not as often as before, going so far as to call Ryan "crazy" for crashing the motorbike they're on and jumped off from it.

However, despite her experience, she has developed some sort of PTSD, which she is shown to have panicked and seemingly losing hope when fighting The Moon, mainly due to The Moon having the same metamorphosis ability as The World, the latter which kills her partner James. She is also seen panicked when Ryan recklessly attempts to do a desperate last-ditch attempt at killing The Moon, as she quickly came to Ryan's aid as soon as he fell.

Nevertheless, she has shown immense amount of bravery and courage throughout the incident, allowing her to help Ryan surviving the ordeal, despite the latter's fear that he would die like his brother.

In House of the Dead: Scarlet Dawn, Kate has her long blonde hair in a bun hairstyle with bangs swept to the left. She wears a red long sleeve dress with see-through floral pattern on her back, a butterfly-shaped pendant, and black high heels with strap. In a flashback cutscene, she wears a plain white long sleeve dress.

According to The House of the Dead series Director Takashi Oda and Producer Yasuhiro Nishiyama, Kate's appearance was inspired by Hollywood actresses.[4] There were various proposals for her wardrobe in House of the Dead: Scarlet Dawn, including wearing a fur coat or military-type clothing to "bring out [her] individuality". Ultimately, it was decided that Kate's dress identified her as being "involved in the case", while also realistically establishing her as a main character.[5]

In the first House of the Dead: Scarlet Dawn location test build, Kate's voice was younger and a line -- "We must leave at once!" -- was spoken despite her lips not moving.[6] The final release cut this line and made her voice more monotone.

Kate and photographs of the creatures. 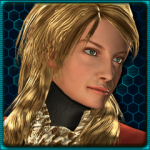 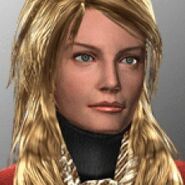 Kate Green in the intro of The House of the Dead 4.

Kate and James preparing to fight creatures in the subway.

Kate and James after defeating The Empress.

Kate in the fourth Chapter, expressing surprise that James thinks there is still hope.

Kate and James after defeating Temperance.

Kate and James, before the final battle.

Kate shooting at The World, as she realizes that it will not stop growing.

Kate screaming for James as he sacrifices himself. 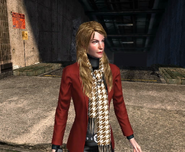 Kate observing the hordes of creatures. 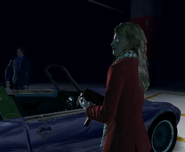 Kate and G in a darkened parking garage. 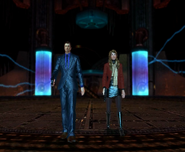 Kate and G, after defeating Magician in the Good Ending. 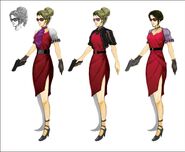 Kate's concept art in House of the Dead: Scarlet Dawn.

Kate's render in House of the Dead: Scarlet Dawn. 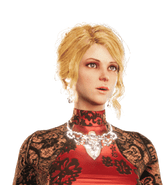 Kate art from getting an A rank in the minigame on House of the Dead: Scarlet Dawn's official website.

Kate and Ryan in a teaser poster.

Kate and Ryan in second version of teaser poster (with logo and other information).

Kate's introduction in House of the Dead: Scarlet Dawn.

Kate and Ryan leaving to embark on their mission.

Kate and Ryan looking for phone reception in the manor.

Kate quoting James about the true battle that "will happen in the future".

Kate and Ryan in the first Chapter of House of the Dead: Scarlet Dawn.

Kate and Ryan on a motorcycle.

Kate showing her PDA to unlock a door.

Kate and Ryan in the laboratory.

Kate and Ryan on one of House of the Dead: Scarlet Dawn's Endings.