The Wiki of the Dead
Register
Don't have an account?
Sign In
Advertisement
in: Article stubs, Notable creatures

Lance (ランス, Ransu?) is a male cybernetic creature. He is an enemy in The House of the Dead 2 and 4. They were first released by financier Caleb Goldman alongside other creatures to thwart AMS agents James Taylor and Gary Stewart from infiltrating Goldman's headquarters.

The creatures are characterized by their great speed and ability to teleport.

In The House of the Dead 2, Lance appears as a naked, hairless metallic humanoid with silver-blue flesh, an absence of eyes, and a gaping, fanged mouth. They are noticeably short in stature.

In The House of the Dead 4, the top of Lance's head is red, with a more noticeable cybernetic physique.

Lance first appears at the bridge leading to Caleb Goldman's headquarters in chapter 5, attempting to slash at the player(s) with energy blades. If the Goldman building is successfully entered in the sixth and final chapter, Lance will begin teleporting in hordes and leap onto the player from the walls.

Lance appears in the sixth and final chapter of The House of the Dead 4 in the Goldman building. Their attack is similar in 2, with the creature appearing in hordes and leaping towards the player(s) with slashing energy blades.

Besides walking on floors and ceilings, Lance can also approach by teleporting, during which he is immune to gunfire. He attacks by throwing his laser knives or biting at close range. Rapid fire is recommended to disrupt a Lance's approach and ultimately kill him; if multiple Lances throw knives at the same time, the player risks taking damage.[1][excerpt 1][excerpt 2] 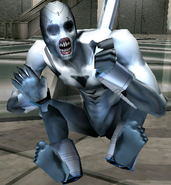 Lance leaping at the player to bite them.