Everyone... everyone... You say everyone is going to die?

Linda Rotta (リンダ・ロッタ, Rinda rotta?) is an AMS agent, and one of the three playable characters in Zombie Revenge. At age 22, she is the youngest female agent of the American agency AMS. Along with fellow agents Stick Breitling and Rikiya Busujima, she is tasked with tracking down ZED and neutralizing the threat of the zombie outbreak. Like Stick, Linda also possesses an understanding of the Japanese language, which allows her to communicate with Busujima, who speaks Japanese but also understands English.

While her lack of physical strength is made up with her speed and prowess with a gun, she did not possess enough experience to be fully prepared for the horror that awaited her, dropping to her knees at the sight of UDS-06B and breaking down when ZED revealed his ultimate goal of killing all humans. Nonetheless, she persevered and helped the others in stopping ZED's plan from coming into fruition. She is however stronger than any average women being exceptionally well in hand to hand combat and grapples.

Linda alongside Stick, Busujima, and ZED.
Add a photo to this gallery

Character select screen at the start of the game. 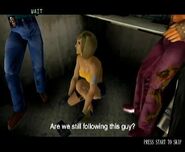 Add a photo to this gallery
Retrieved from "https://thehouseofthedead.fandom.com/wiki/Linda_Rotta?oldid=27161"
Community content is available under CC-BY-SA unless otherwise noted.