The Wiki of the Dead
Register
Don't have an account?
Sign In
Advertisement
in: Characters, Female characters, Playable characters,
and 3 more

Lisa Rogan (リサ・ローガン, Risa Rōgan?) is the daughter of former AMS agent Thomas Rogan and ex-DBR researcher Sophie Richards. She is one of the main protagonists of The House of the Dead III.

After losing contact with her father in 2019, Lisa partnered with Rogan's retired partner G to find him within the EFI Research Facility. These efforts culminated with Lisa helping destroy Wheel of Fate, the resurrected form of Rogan's adversary Dr. Curien, saving mankind from destruction.

Early concept of Lisa as black-haired, pictured alongside an unknown character.

Sketch of an early version of Lisa and a creature, who is wielding feces on a stick. This was likely a joke drawing by the developers.

Pencil sketch of Lisa and G.

Lisa and G being stalked by Death. This image appears in the arcade version's attract mode. 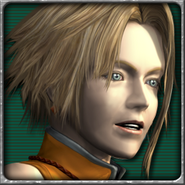 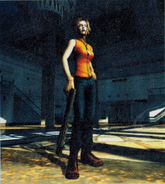 Lisa and G artwork from an issue of Famitsu Xbox.

Lisa listening to her father's advice.

Lisa, before destroying Wheel of Fate.

Lisa in the bad ending.

Lisa's bio from page 29 of The House of the Dead III Perfect Guide.