Changes: List of creatures in The House of the Dead 4 and 4 Special

Stones-B: Similar to Stones-A, but has a mohawk and no tattoos on its body. Appears only once in Chapter 1.

Mackey: Burly zombie in a coat; attempts to shoulde tackle the player. Appears only in the first chapter. 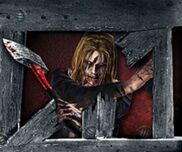