The Magician to Kate Green and "G".[src]

Type-0, codenamed the "Magician," (マジシャン) was a sentient humanoid creature with pyrokinetic and levitational powers. He was originally created in 1998 by genetic engineer Dr. Roy Curien, then research director of the DBR Corporation, as part of insanity-driven efforts to control life and death. The Magician ultimately betrayed his creator and was destroyed by agents of the government organization AMS, but was resurrected during other biological engineering-related incidents.

He is the final boss of The House of the Dead, and has made further appearances in the main House of the Dead series as either a boss or a bonus item. He is characterized by his sentience, fast and deceptive movement, and fire-based attacks. His weak points are his exposed, pulsating muscles.

Who are you? Nobody gives me instructions. I shall destroy everything.

The Magician, alongside the Wheel of Fate, began life as a gene developed by Curien during his time as the DBR Corporation's research director. After curing his terminally-ill son Daniel, Curien obsessively pursued controlling life and death through science; the effort, funded by Caleb Goldman, produced hostile creatures and triggered staff walkouts. Curien went insane, releasing the creatures in his mansion on December 17th and 18th, 1998, but kept the Magician in incubation.

On December 20th, AMS agents Thomas Rogan and G investigated disappearances at the mansion. They battled to a research center and confronted Curien, who unleashed his "masterpiece" upon them. However, the Magician -- claiming that he obeys no inferior being -- killed Curien. Rogan and G defeated the Magician, who warned them that they "...haven't...seen...anything yet!" before exploding.

I've been waiting for this time to come. You have no future. Either I get you, or the Emperor will. Either way, your fate is in our hands.

Just over a year after the Curien Mansion incident, the Magician was reanimated by Goldman, head of the powerful DBR Corporation, furthering Curien's incomplete research into life and death. The Magician was loyal to Goldman and the Emperor, Goldman's creature poised to rule over mankind. He ambushed AMS agents James Taylor and Gary Stewart outside of Goldman's headquarters, but was ultimately destroyed again.

Main article: The House of the Dead 4: Special

I have been waiting for this moment for some time. Now you shall have a taste of the pain that I have endured!

The Magician to Kate Green and "G".[src]

In 2003, Goldman staged a posthumous incident worldwide, wiping out most of civilization. After her partner James sacrificed himself to defeat Goldman's ultimate creation, the World, rookie AMS agent Kate Green collaborated with G to fight the incident back to its source. In an unidentified building, they found the Magician, who emerged from a large glass chamber and vowed revenge for the pain he had endured.

Upon defeat, the Magician summoned Pandora's Box, attempting to activate clones of himself; he was fatally wounded after a thrown grenade, declaring "Nothing can erase [his] pain" before exploding.

The House of the Dead III and 4

The Magician appears as a bonus item: the Mini-Magician, a small golden statuette found in destructible background objects. The Mini-Magician flies about in a quick manner like him, making it more difficult to shoot; a successful shot yields 2000 points to the player's score. In III, when the item is on-screen, a high-pitched version of his line "I've been waiting for this time to come" from 2 can be heard.

The Magician's voice is also used to alert the player when they have the opportunity to enter a boss battle. The player will hear the Magician say, "I have been waiting for this time to come", a line used before the Magician's battle in The House of the Dead 2. Also, when the player gets a game over, he will say "You have no future."

The Magician is an incredibly fast and dangerous adversary, and is rightfully considered the hardest boss in The House of the Dead series. His speed is unrivaled, he relies on pyrokinesis to attack, and possesses the ability to levitate and teleport, implying that he uses a revolutionary anti-gravity propulsion system to allow him to constantly veer from left to right at crushing speeds in order to confuse the player.

His weak points are listed as "UNKNOWN" in his first appearance and in THOTD4 Special, but are visually indicated by the unarmored parts of his body that glow red. This includes his lower right leg, upper left leg, lower right arm, upper left arm and the area around his right eye. The glowing effect is absent in the PC and Saturn ports of the first game, and his weak points are shown in G's File in THOTD2. Like other bosses, attacking these areas is crucial in disrupting the Magician's attacks.

In the first two games, he followed a specific fight pattern. In the first wave of the fight, he will hurl fireballs at the player while spinning. After doing this twice, he will form more fireballs from both hands, which are more difficult to shoot down. His fireballs can be shot down, and the Magician can be damaged as he attacks with them. He will repeat this wave until he has taken enough damage.

He will then change tactics and teleport rapidly to the left or right of the arena to puzzle the player. After three teleports in either or both directions, he will charge at the player with a fireball in his hand, and this fast attack can only be disrupted with a successful shot to one of his weak points. Five successful hits will stop the assault, and he will repeat his earlier attack wave, followed by another series of charge attacks when he takes enough damage once more.

His tactic will change again once he has taken 50% damage. In the first game, he will move to the middle of the arena and project a large group of fireballs in the air that will slowly rain down on the player, and must all be shot to avoid damage. The Magician can only be attacked as he charges the fireballs when the camera is focused on him.

This attack is slightly altered in The House of the Dead 2 where he hovers in mid-air and sends the fireballs straight at the player. He throws slightly fewer fireballs and they are scattered around the middle, but to compensate for those factors, this attack is faster as these fireballs don't slowly drift to the ground like they did in the House of the Dead. Furthermore, the Magician is vulnerable the entire time. He will repeat this attack until he is defeated.

In both games, the Magician's teleportation is represented by differently colored after images of him. Blue was his standard attack of throwing fireballs from a distance, while red warned the player that he would engage in his dreaded charge attack. THOTD2 added white when he engaged in his final attack, but could regularly be seen throughout the battle depending on the player's performance and difficulty level. The Magician is invulnerable while teleporting.

In Special, the Magician is shown to have energy surging on his weak points instead of them pulsating, and is shown to be more powerful than his previous incarnations. He also bears a purple aura. Before actually emerging to battle the AMS agents, the Magician launches a salvo of fireballs at them from within his incubation chamber. This triggers a quick time event in which the players have to shoot all of the fireballs down to avoid taking damage. The Magician emerges after the attack's conclusion, regardless of the player's success or failure in deflecting it.

After diminishing the Magician's health, he will summon and attempt to open Pandora's Box. The player is given the chance to stop it with a grenade. If the player fails in stopping the Magician from opening the box, he will proceed to release numerous clones of himself from incubation, showing that the Magician had cloned himself. laughing evilly, implying that he will attack and overwhelm the AMS agents and then all of humanity with his clones, resulting in the Bad Ending. This ending also implies that the Magician is indeed Curien's original Magician, which had been resurrected.In the Good Ending, the Magician is fatally wounded by a grenade and succumbs to a violent explosion once more. With his final breath, he has time to utter one final monologue - "Nothing can erase my pain".

However, after his demise, Thornheart appears at the Magician's incubation chamber. Upon entering the chamber, he remarks, "So, Pandora's box has been closed... that is if there is any hope left, the Wheel of Fate cannot be stopped."

The Magician is now able to teleport in any direction on the screen. He will alternate between throwing fireballs with one hand, both hands, and his dreaded charge attack without warning. Unlike before, multiple shots on the Magician are required to disrupt this attack. At 50% health, he will gather several fireballs in his hands and attack in one of two ways: He will either charge at the player or throw the fireballs into the air to home in on the player. He will continue this until he is defeated once more.

Sketch of the Magician casting a fireball.
Add a photo to this gallery

The Magician surrounded by fire. 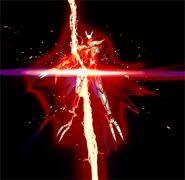 The Magician before exploding.

The Magician from the box art of the Sega Saturn version of The House of the Dead.
Add a photo to this gallery

Texture of the Magician's weak point diagram.
Add a photo to this gallery

1st Magician.jpg
Magician V1 About To Strike
Add a photo to this gallery

The Magician hovering in front of Goldman's headquarters.
Add a photo to this gallery 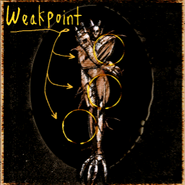 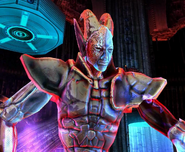 Magician in The House of the Dead 4: Special. 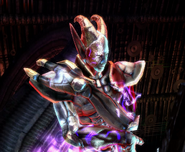 Magician in The Pinball of the Dead.

Magician as shown in the intro to The House of the Dead III.

Magician's concept art for the cancelled action figure line.
Add a photo to this gallery
Retrieved from "https://thehouseofthedead.fandom.com/wiki/Magician?oldid=15677"
Community content is available under CC-BY-SA unless otherwise noted.