Muddy (混濁, Kondaku?) is the second chapter of The House of the Dead 2.

The scene begins with a man driving on the street, with a David blocking his view. The creature should be shot off before the car gets too close to the player.

The player could not shoot off the David in time, causing the car to crash into the jewelry store and kill the driver. A cutscene will play before a woman screams, showing that she is about to be attacked by two Kageos.

Tip: Shoot the one in front first, then the one on the left of the woman.

As the player leaves the elderly couple, they will hear a woman crying out for help, banging behind the gate of the clock tower.

Tip: Kill the creature on the left first and then behind the woman.

The player will go through the dungeon after a short cutscene. After some more progress, they can destroy a closet in the cellar to take a shortcut.

The player leaves through a door not visible previously, eventually emerging near a man by a fountain being attacked a David, with a Bob headed towards them.

James and Gary get dragged into the river by creatures, and they must get across it to reach Sunset Bridge.

The bridge connecting to the wharf is destroyed, and James and Gary are dragged by creatures down into the water.

A child will come out of the right house, running away from a creature.

The child's father is locked inside the right house, and it's up to James and Gary to rescue him. This house automatically leads to Sunset Bridge. 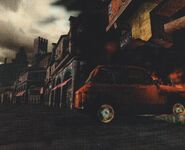 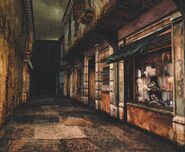 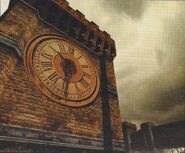 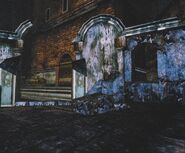 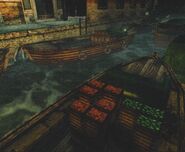 A boat filled with crates.
Add a photo to this gallery

Retrieved from "https://thehouseofthedead.fandom.com/wiki/Muddy?oldid=33517"
Community content is available under CC-BY-SA unless otherwise noted.