The Wiki of the Dead
Register
Don't have an account?
Sign In
Advertisement
in: Characters, Deceased, Antagonists,
and 3 more

I enjoy pain. It's like a good Chinese dinner, you know? With the sweet, and the sour? Expanding on that analogy, I will smile with delight, that's the sweet, as you scream for your fucking life. Of course, that's the sour. Ciao!

Papa Caesar was a crime lord and kingpin from Bayou City, Louisiana. He is one of the main antagonists of The House of the Dead: Overkill, and is voiced by Armand St. Juste.

An accomplice to prison warden Clement Darling, Caesar helped trigger a 1991 mutant outbreak in Bayou City, Louisiana due to experimentation with the war mutagen Formula X. This brought him into conflict with AMS agent G; Detective Isaac Washington, who alleged that Caesar murdered his father; and stripper Varla Guns, who sought revenge for Caesar's abuse and manipulation of her disabled brother Jasper in order to perfect the mutagen.

The notorious kingpin of Bayou City, Papa Caesar exudes wealth, power and commands respect from the highest authorities in the city. In the past Caesar had a confrontation with Isaac's father, who tried to apprehend the kingpin, but failed and was seemingly responsible for the latter's death. This sparked a long bitter feud between Caesar and Isaac.

Caesar eventually became acquainted with the local prison warden, Clement Darling, who had recently uncovered a secret laboratory underneath his prison, housing a top secret mutant compound. On behalf of Clement, Caesar took position as the head of the operations to experiment on the mutant compound, using various locations, such as the plantation house and Bayou City's local hospital. Caesar forced local genius, Jasper Guns, to serve as his personal researcher by using Jasper's own sister, Varla, as leverage. Caesar's activities had caught attention of the AMS, who sent in rookie agent, G, to apprehend the kingpin, however at the same time Caesar had lost control of the mutant compound, causing an outbreak that transformed Bayou City's populace into mutants.

Caesar retreated to his plantation house to collect the mutant compound that was refined by Jasper and prepares to leave for the hospital. Not long after, both G and Isaac managed to track Caesar back to the plantation house and the two proceeded to blast their way through hordes of the undead and confront Caesar. As G and Isaac prepare to confront Caesar, the latter had provoked Jasper, which drove him to use the mutant compound on himself.

Caesar quickly made his escape, while G and Isaac were forced to fight the newly mutated Jasper. Aware that both G and Isaac are heading for the hospital, Caesar unleashed several mutants within the hospital, including the Screamer to dispose of the two.

After G and Isaac defeated the Screamer, Caesar contacted the two via phone that was implanted within the mutant to taunt the two and proceeds to detonate the hospital, though the two managed to escape with the help of Varla. As Caesar arrived at the train station, he was confronted by Varla, followed by G and Isaac. While the three argue amongst themselves on how to deal with Caesar, the kingpin himself used the opportunity to slip through the three and boards the train, but not before being shot by Isaac. After G and Isaac boarded the train and fought their way through hordes of mutants, Caesar unleashes the vicious Crawler to kill the two.

After the Crawler's defeat, the train derails in the swamps, although everyone, including Caesar survived the ordeal. Caesar proceeds to kidnap Varla and throws a tape recorder at Issac while taunting him. Later in the prison, Caesar is shown strapped to an electric chair like the also-captured Varla Guns. At this point, Clement reveals himself as the true mastermind, though he still credits Caesar as the killer of Issac's father. After a moment of shock and disbelief, Caesar finally meets his end when Clement activates the electric chair he's sitting on and kills him, robbing Issac of his revenge.

"Hello, Isaac. This is Caesar. We've never seen eye to eye, you and I. But I wanted you to be aware of some important things. I find myself burdened with an inexorable sense of moral duty, Isaac. And in the absence of a friend to confide in, I turn to you. You know of Clement Darling yes, the cretin prison warden? It was he who originally discovered the mutant compound in a secret lab beneath his prison. Clement's ambitions are small minded, Isaac. But he has friends, powerful friends. And they have had access to the compound for some time. You should know this so you can prepare, Isaac. So you can warn the right people while there's still time. And there's so little time. And one more thing, Isaac. Are you aware your father... Is still alive? [Laughs]"

At the end of the credits, the recording that was given to Isaac is played. It reveals several things, some of which could possibly be ties to the mainline House of the Dead series. However, the intentions are vague as series director Takashi Oda has not confirmed if Overkill is a canonical mainline entry.

Caesar explains that he has been burdened with a sense of "moral duty", and with no one around to confide in, he turns to Isaac and reveals the following:

Papa Caesar has short brownish-gray hair and a matching gotye with sideburns. He wears a mint green, long shirt with matching colored pants and a pair of red loafers. He had a red hankerchief wrapped around his neck and tucked beneath his collar. Gold bracelets cover his wrist and he wears a flashy red ring over his right ring finger. He carries a redwood walking cane topped with a beige grip. 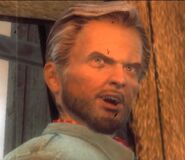