I'm tired of people close to me being a victim.

Ryan Taylor (ライアン・テイラー, Raian Teirā?) is a rookie agent of the now-defunct American government agency AMS. He is one of the main protagonists of House of the Dead: Scarlet Dawn.

The younger[note 1] brother of the late special agent James Taylor, Ryan aided in a 2006 undercover investigation of Scarecrow Manor, uncovering a plot to decimate humanity with biologically-engineered creatures.

Ryan respected his brother James, an AMS agent who sacrificed himself to foil a 2003 bioterrorist plot by Caleb Goldman.[1][2] At some point in time, Ryan became an AMS agent himself.[1]

On December 6, 2006, Ryan was dispatched for an undercover investigation of "Code R" at Scarecrow Manor, with agent Kate Green joining him. After the owner unleashed creatures upon reception guests, the agents battled through the manor. Among the creatures they defeated were Chariot, Hangedman, and High Priestess. Ryan feared that he would die like James.[3]

Ryan and Kate found evidence revealing that the owner, Thornheart, was affiliated with Goldman and Dr. Curien, and is devising a scheme named "Noah's Ark". The agents confronted Thornheart in a church, but he escaped as a massive creature, Moon, emerged. Realizing that Moon was impervious to gunfire, Ryan impaled it with a giant metal rod, causing the creature to be fatally struck by lightning. Kate told Ryan that this was James himself intervening from the dead.[3]

Shortly after, Ryan told Kate that he is tired of people close to him being victimized. Kate reminded him of James' motto: "No sacrifices anymore. It's too late for regrets. Something like that."[4]

Although courageous, Ryan is at times naive and reckless, often quipping at the creatures (such as calling Chariot "big boy"). He is more somber over James' death, expressing frustration that people close to him have been victimized. He fears sharing a similar fate.

Scarlet Dawn's development team experimented with a variety of clothing designs for Ryan, including a military-type ensemble to "bring out [his] individuality". Ultimately, it was decided that his suit identified him as being "involved in the case", while also realistically establishing him as a main character.[5]

In the first House of the Dead: Scarlet Dawn location test build, Ryan's voice was goofier and more exaggerated; the final release made it more serious in addition to altering some dialogue.[6] 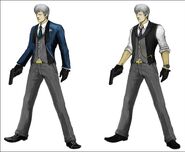 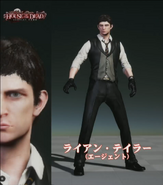 Model shown during JAEPO 2018's event.
Add a photo to this gallery 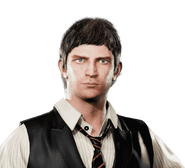 Ryan art from getting a B rank in the minigame on Scarlet Dawn's official website.

Another piece of Ryan artwork from Scarlet Dawn{{'}s website.

Ryan with Kate in teaser artwork.

Ryan and Kate leaving to embark on their mission.

Ryan losing phone reception in the mansion, while conversing with Kate

Ryan and Kate on a motorcycle.

Retrieved from "https://thehouseofthedead.fandom.com/wiki/Ryan_Taylor?oldid=33872"
Community content is available under CC-BY-SA unless otherwise noted.