Produced by genetic engineer Dr. Curien and his associate Thornheart, Samson was used to help orchestrate humanity-threatening incidents worldwide. He is a strong adversary and can deflect gunfire with his chainsaw.

A sketch of Samson. 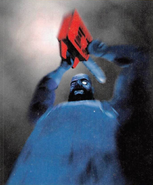 AMS agents Thomas Rogan and G killing a Samson. This flashback sequence is only on home ports of The House of the Dead 2.