The Wiki of the Dead
Register
Don't have an account?
Sign In
Advertisement
in: Article stubs, Developers

Sega AM Research & Development No. 1 (Sega AM1 for short), formerly known as Wow Entertainment, is a arcade and smartphone game development division within Japanese video game developer Sega. It is the creator of the House of the Dead video game series. A majority of the studio's leadership was held by Rikiya Nakagawa, who operated as president for a decade before resigning in 2003.[1]

Sega AM1 eventually became recognized for their technological advances in game development, such as being one of the first developers to implement 3D computer graphics.[2]

In 1983, Rikiya Nakagawa joined Sega as a junior programmer for arcade game titles. [3] Sega created AM1 later that year after deciding to switch game development divisions into designated "AM" teams. Nakagawa was made the manager of AM1 in 1993.

Beginning in 2000, Sega split their game development studios into nine autonomous companies. During this transition, AM1 was re-named Wow Entertainment. Wow was a primary developer for games on the Sega Dreamcast, also porting their earlier arcade titles from the Sega NAOMI arcade board, which they also created. In 2003, Wow merged with Overworks Ltd., and was renamed again, this time as Sega Wow. Shortly after the company's integration, Nakagawa resigned. [4] 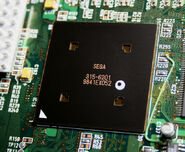 The NAOMI arcade system board, which AM1 was tasked with programming. 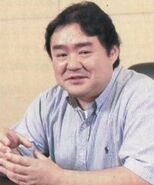