The Wiki of the Dead
Register
Don't have an account?
Sign In
Advertisement
in: Article stubs, Pages needing references, Games, Non-HOD games

Two unnamed college students are touring China for a trip. While inside a museum, the two are suddenly attacked by mythical creatures and zombies. However, a security guard from the museum gives the two Golden Guns and explains how to use them. With the guns in hand, the two students use them to fight back against the monsters as well as trying to figure out the source of where they're coming from.

Throughout the game, the students travel to different parts of China each overrun with creatures and a boss at each end. Each boss is a reincarnated form of a mythical figure from Chinese history. They fight Zhang Jiao, a sorcerer from the Han Dynasty who takes on the form of a giant turtle in the town of BaiJaiFang, Gao Qiu, an advisor from the Qin Dynasty who battles with a dragon in the JiuQuYuan palace, and Da Ji, a concubine from the Shang Dynasty in possession of a tiger spirit in the ShiLiTan city.

Occasionally, the students battle a hooded figure who requests to test their strength in every location; he is later revealed to be the Monkey King who wants to see if the students can defeat the final boss, who returned to life once again after being possessed by a phoenix. Once the final boss has been defeated, the Monkey King begins the task of repairing the city while the students decide to go to the arcade and play House of the Dead.

In the post-credits scene, the Monkey King acquires the golden gun and swears revenge before disappearing.

In another post-credits scene (if the "?" item is purchased in the shop), the museum security guard is revealed to a spirit as well and becomes surprised when he hears the students have defeated the four mythical beasts. He then teleports away to an unknown location to report to his boss about them.

Like the House of the Dead games, Sega Golden Gun is a rail shooter in which players blast enemies while the camera travels a predefined path. Pistols are the primary weapons; they hold 12 bullets, and pointing the gun outside the screen will reload them. However, if the player continues shooting with no bullets remaining, the gun will automatically reload. Consequently, this reloading takes longer. Blue and pink reticles appear wherever players 1 and 2 aim, respectively. Most levels end with a boss fight.

In each stage, an item merchant will appear twice in the background; shooting him activates the Item Shop. Here, players can spent the points they've accumulated on special items, including different weapons, enemy weakening items, and bonus lives. Item prices increase during multiplayer and for each stage the player advances. If the player runs out of lives and continues, they will get items as a bonus.

Like House of the Dead: Scarlet Dawn, the game is comprised of a prologue chapter, three middle chapters — Bai Jia Fang (百家坊), Jiu Qu Yuan (九曲园), and Shi Li Tan (十里滩) — that can be selected in any order, and a final chapter once all have been completed. Unlike Scarlet Dawn, the route is set once players decide on the second chapter, and there are no branching paths. This effectively makes Sega Golden Gun the most linear game of the franchise. 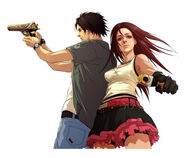 Back of promotional flyer.