Sophie Richards (ソフィー・リチャーズ, Sofī Richāzu?) is a former researcher of the DBR Corporation. She served under genetic engineer Dr. Curien, who sought to control the veil between life and death through science. The project drove him mad, and he released hostile biologically-engineered creatures in his mansion to slaughter team members; Sophie survived the incident, married AMS agent Thomas Rogan, and give birth to their daughter Lisa.[2]

Sophie is a supporting character of The House of the Dead. Cheat codes and bonus features on all versions of the game make her an alternate skin for either Rogan or his partner G.[3]

Sophie Richards was born on July 21, 1969.[1] At age 28, she was employed by the DBR Corporation as a researcher, joining a team led by genetic engineer Dr. Curien to work on his top-secret BioReactor project.[1] The DBR laboratory was built inside Curien's mansion.

Sometime in 1998, Sophie engaged to be married with AMS agent Thomas Rogan, who had met Curien several times in the past.[1][4]

Although respected by Sophie and his research team,[5] Curien's sanity deteriorated when his son Daniel contracted a terminal illness. Disillusioned from staff walkouts[6] and seeking to destroy humanity and civilization,[7][8] he produced hostile biologically-engineered creatures to unleash upon his own research team.

As her fellow researchers were murdered, Sophie left Rogan an urgent phone message.[9] He and his partner G arrived at the Curien Mansion to find Sophie feigning death in the creature-infested front yard. She was kidnapped by Hangedman, a bat-like creature, and flown back inside the mansion. The agents heard Sophie's cries for help from inside one room and reunited with her. Chariot, an armored creature, ambushed and mortally wounded her. Before passing out, she urged Rogan and G to defeat Curien and prevent a disaster.[10][11]

Following the Curien Mansion incident, Sophie married Rogan and gave birth to their daughter Lisa.[2] Their relationship with Rogan was strained; he prioritized work over family, and he often worried them.

Sophie was named Carole during development of The House of the Dead. Described by game designer Hiroyuki Taguichi as more "intellectual" than Sophie, Carole was envisioned as a playable character.[12]

According to series director Takashi Oda, there was a scrapped idea to make Sophie a boss in The House of the Dead 2.[2]

Sophie was named "Carole" during The House of the Dead's development.
Add a photo to this gallery 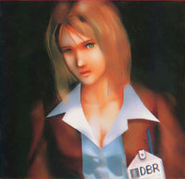 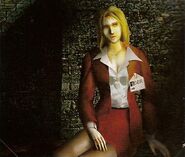 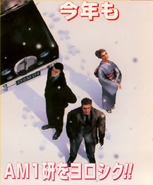 Sophie, Rogan, and G in a New Year's greeting from a March 1998 issue of Sega Saturn Magazine.
Add a photo to this gallery

Sophie as a creature in the "Bad" ending.

Sophie, very much alive in the "Good" ending.

A weeping Sophie from House of the Dead: Nightmare

Sophie's rotten form in the bad ending of House of the Dead: Nightmare
Add a photo to this gallery 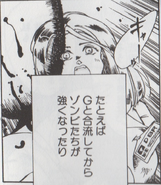 Sophie in The House of the Dead Manga "PUMPS".
Add a photo to this gallery

Retrieved from "https://thehouseofthedead.fandom.com/wiki/Sophie_Richards?oldid=25545"
Community content is available under CC-BY-SA unless otherwise noted.