The Wiki of the Dead
Register
Don't have an account?
Sign In
Advertisement
in: Bosses, Plantoid Bosses, The House of the Dead III bosses

Inhabiting the Bio Lab, Sun attacked with vine-like tendrils (named Sunsun) and serpentine creatures within giant petals. Its weak points were these parts of its body in addition the ring of human faces around its trunk.

Sun was created in the EFI Research Facility's Bio Lab as part of experiments to combine human DNA and plant life.[1] After the facility was abandoned, Sun overgrew and took over a majority of the lab.

In 2019, Lisa Rogan and G infiltrated the facility in search of Thomas Rogan. Sun attacked them with its tendrils throughout the Bio Lab, before fighting the pair directly in the lab's chamber. After being pelleted with shotgun shells, Sun died, with its petals and heads inside falling apart.

Lisa kicked a dead part of Sun aside, quipping that she "was never any good at gardening", before she and G escaped the lab.

Sun is immobile, thus making it susceptible to damage via its human face-ridden trunk. However, the creature's means of defense -- its tentacles, and the serpent-like beings inhabiting it -- evoke the element of surprise, especially to a beginner player. The tentacles are evasive targets as they snake about the battlefield: the serpents can spit spores either in the air or directly into a player's face. Shooting Sun's trunk in between attack phases is the easiest and fastest way to deplete its health bar. 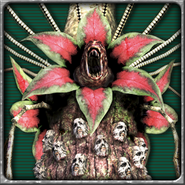 Sun in the Famitsu The House of the Dead III Perfect Guide. 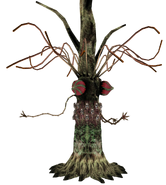