Splendid... The moment when existence turns to nothingness in a flash of brilliance... Nothing is more beautiful than the moment of death...

Vampire hunters Michel and Albert arrived at a village and fight their way through the vampires while saving villagers who are infested by a parasitic Sarcoma. Arriving at the village square, A group of Velochipers confront them only for Bathe'lemy himself to appear and order his minions to withdraw. Impressed by the hunters' skill, Bathe'lemy drew his sword and challenged the hunters to a duel, chasing them through the village. Having finally cornered the hunters, Bathe'lemy transformed into his true form, only to be defeated by the hunters. Reverting back to his human form, Bathe'lemy questioned why did they chose to protect the humans, before finally succumbing to his wounds. 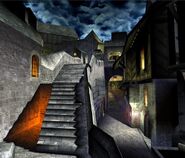 Add a photo to this gallery
Retrieved from "https://thehouseofthedead.fandom.com/wiki/Sword_Dance_Sonata?oldid=26767"
Community content is available under CC-BY-SA unless otherwise noted.