Type-1210, codenamed "The Empress," (エンプレス) is a swift and agile assassin that pursued Kate and James. While she possesses a lean blue body (and glowing red eyes), the Empress is surprisingly strong, able to lift her almost-comically oversized double-ended chainsaw and using it to slice through the subway cars of the train she is fought in. She weakly resembles the Emperor, although her power pales in comparison. Her entire body is invulnerable to damage, but shooting her head will cause her to recoil. Some fans also say that the Empress almost completely resembles Strength. Despite the aforementioned titanic chainsaw, she can make great bounds and leaps as well as cling to a variety of surfaces.

Taking the subway into zombie-infested streets from an underground shopping district, the agents narrowly avoid attacks by Type-1210. The Empress takes advantage of the train by attacking while her vulnerable head is sometimes covered as she moves closer to the agents. The sleek blue creature silently reassured the agents of her purpose as she tore through the subway cars one by one attempting to kill them. The Empress makes no attempt to hide her athletic prowess as she leaps from the interior to the exterior of the subway train, tearing it up as she goes. Eventually, reaching the end of the train, she makes one final mad dash at the agents, but is swiftly put down through a hail of gunfire. Mortally wounded, she falls through an open doorway onto the opposite track, where she is run over by a speeding train going the other way.

The beast must have been the successor to the Strength boss. She is protected by a blue transparent skin texture that act's as it's physical armor. She has glowing red eyes and carries a titanic chainsaw. Similar to Strength, her weakpoint is her head and her chainsaw weilding skills makes it difficult to aim for the head.

ROUND 1 (Car No. 5) Before the fight begins, a cutscene ensues where James' arm is stuck and a QTE (Quick Time Event) is triggered. The player must shake his/her gun to break free. After fleeing from Car No. 6, kill the undead passengers from the next car.

ROUND 2 (Car No. 5) Afterwards, the Empress begins the pursuit. She will charge and swing the chainsaw on you. Quickly shoot her head to stun her, and move to the next car.

ROUND 3 (Car No. 4) You'll find a group of zombies in the other train outside. Shoot the ranged zombies down before their axes get you.

ROUND 4 (Car No. 4) James yells, "This isn't an authorized transfer point!". The Empress cuts down two fire extinguishers from the left, and a door from the right, hurling them all to you. Destroy these as quickly as possible, as the Empress chases you. Shoot again her head to stun her before the chainsaws stun YOU.

ROUND 5 (Car No. 3) The half-mortally wounded Empress jumps above the train. When Kate says, "That thing is getting closer! Hurry!" the Empress starts to saw down the train from above the roof, its blade mowing its way to behead you. Use the crevice above to shoot her head and stun her as fast as possible to avoid taking damage.

ROUND 6-7 (Car No. 3) The Empress mutilates the train along the left-side windows. Shoot her head whenever it becomes visible. This is hard due to the wall. Fire as quickly as possible before her chainsaw dices you. Reload the moment the head is not visible and shoot her head once again. NEVER waste a grenade against her here. It's possible (and easy to do so) to stun her without using a grenade.

ROUND 8 (Car No. 2) The Empress cuts her way back inside the train and pursues you to its end. As she runs forward to mow both your heads off, shoot continuously at her head to stun her in time. Quickly run to the last car...

ROUND 9 (Car No. 1) HOLD a grenade. The Empress goes insane now. She steps forward and alternately flails a chainsaw from each hand. Since she starts fairly far away, the grenade can either stun her immediately or just blast off a healthy chunk of the CANCEL Gauge, leaving you free shots to stun the Empress. Simple rapid fire is enough to stun the Empress if you wish not to throw a grenade.

ROUND 10 (Car No. 1) Now that you're in a dead end, the Empress has approached even closer to you. Quickly aim a grenade AT THE BASE OF THE SCREEN. Of course you won't blow yourself up, but the blast can blow off a large chunk of the CANCEL Gauge from the Empress. Before being slashed by her rampaging chainsaws, shoot her head rapidly.

ROUND 11 (Car No. 1) Nearing her impending doom, the Empress desperately steps toward you as a last resort to kill you head-on. She now uses her sturdy chainsaws to shield her face from total damage. Shoot her head continuously to finally kill her. Like Justice, a grenade bang can also kill her immediately. She'll soon fall down from the subway car and get crushed by another train on the opposite track.

JAMES: Looks like you've missed your stop! (If the player plays as James only)

KATE: Don't forget to write! (If the player plays as Kate only)

KATE: James! Up ahead!

(James and kate jump from the speeding car)

KATE: That was close.

ALL rounds of the battle has the Empress' main weak point openly exposed. SPEED and ACCURACY are key to simply stun her every round. Unless both of you have 5 grenades EACH, use 1 for each time you face the Empress to make life against her a lot easier till the end of the battle.

All over the train, shoot the windows on the side as well as the seats along the walls. After escaping from the door during the introduction, you can shoot the Empress as she approaches you before escaping to the next car. When the Empress throws at you the fire extinguishers and the door stuff, shoot her before the debris land point blank on your face. 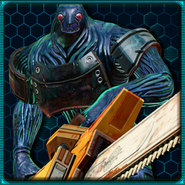 Add a photo to this gallery
Retrieved from "https://thehouseofthedead.fandom.com/wiki/The_Empress?oldid=11812"
Community content is available under CC-BY-SA unless otherwise noted.
FandomShop Newsletter Join Fan Lab