They've come for brains. You'll give them... bullets.

Set in 1991, the game follows rookie AMS agent G and foul-mouthed Detective Isaac Washington as they tackle a mutant outbreak in the small town of Bayou City, Louisiana.

Developed as a homage to exploitation films, Overkill is considerably more adult than the main House of the Dead series. It was written and marketed as a prequel to the original 1996 game The House of the Dead. However, series director Takashi Oda had limited involvement with Overkill and has never confirmed if he considers it a canon, mainline House of the Dead game.

Overkill was praised by critics for its gore, vulgar humor, and tributes to exploitation films, but received a mixed reception from fans.

In 1991, rookie AMS agent G and Detective Isaac Washington investigate disappearances and a mutant outbreak in Bayou City, Louisiana. They storm the mansion of Papa Caesar, a crime lord who killed Isaac's father. Caesar flees, while disabled scientist Jasper Guns, whom Caesar used, is mutated after injecting himself with an unknown substance. After defeating Jasper, G and Isaac meet his sister, stripper Varla Guns, who seeks revenge on Caesar.

G and Isaac track Caesar to a hospital, battling the Screamer and escaping with Varla after the building is set to explode. At a carnival, they defeat mutated circus performers Nigel and Sebastian. G and Isaac pursue Caesar on a train, defeating the Crawler, a mutated mantis. Varla is kidnapped by Caesar, who throws a tape recording to Isaac.

The train crashes into a swamp, where G and Isaac battle the mutant Lobber and escape. They reach a high security prison, with Caesar and Varla strapped to electric chairs. Warden Clement Darling claims responsibility for the outbreak, with Caesar a mere accomplice; he executes Caesar, robbing Isaac of his revenge. G and Isaac fight Brutus the Ruthless, a mutated convict who murders his partner before the battle.

G and Isaac confront Clement in his underground laboratory. To cure his sick mother (with whom he shares an incestuous relationship), Clement has transplanted her brain into Varla's body, which grows and mutates into a giant creature known as Mother. After her defeat, Clement "returns to the womb" to atone for the problems he caused.

G and Isaac leave on a helicopter with Varla's still active brain in a jar, detonating the facility. G tells Varla of his feelings for her, prompting him and Isaac to discuss the game's moral and political messages. The helicopter pilot is then revealed to be a mutant.

In his tape recording, Caesar reveals Clement was involved with "powerful friends", and that Isaac's father is still alive.

Like previous games in the House of the Dead series, Overkill is a rail shooter with pre-determined character movement, with the shooting element under player control by pointing the Wii Remote at the screen, moving the aiming reticle. The player can point the reticle near the edge of the screen to move the camera angle slightly in that direction, allowing a further field of view known as "Danger Cam". The PlayStation 3 version allows the player to choose between aiming manually with the analog sticks, or a Playstation Move controller. The story mode can be played solo or with another human player, with one weapon or dual-wielding controls.

Players can also build up a combo meter by killing mutants to receive a score, with further points gained by performing head-shots, shooting bonus pickups, saving civilians and attaining multiple kills without missing a shot. If a player dies, points from their overall score can be quickly spent to continue playing. At the end of each level, the player is awarded a grade that depends on their final score among other factors such as not dying, and accuracy of shots. Along with score bonuses, other pick ups scattered throughout levels include health packs, grenades and the "Slow-Mo-Fo" pick up that puts everything into slow motion temporarily.

New guns and gun upgrades can be bought with cash earned from the player’s end-of-level score, between levels at the Gun Shop. Upon completing the story mode, Director’s Cut is unlocked providing the same game as story mode but with tougher enemies and a limited amount of continues, among a selection of one-off mini-games; "Stayin’ Alive" where players must survive a continuous wave of mutants, "Victim Support" where players must help a group of civilians escape and "Money Shot II", a competitive mode where up to four players must achieve the highest kill score. Completing the Director's Cut unlocks dual wield mode.

The House of the Dead: Overkill features 8 weapons. Initially, players start with the standard-issue AMS Magnum pistol. There are five weapons initially available to purchase. A pump-action shotgun, a sub-machine gun, an automatic shotgun, an assault rifle, and finally a very large revolver dubbed 'The Hand Cannon'.

Players also have the option of upgrading various aspects of each weapon. These aspects include recoil, clip size, firing rate, reloading time and damage inflicted.

Throughout the various levels, players can also collect hand grenades and in the final level, Agent G and Detective Washington battle the final boss using a pair of miniguns that were apparently just 'lying around'.

By unlocking enough of the game's content in the Director's Cut mode, the minigun becomes available to purchase for use at any level.

The following is a detailed explanation of the weapons:

Extra Chapters (available in the "Extended Cut" version and Typing of the Dead version):

Each chapter is presented as a 'movie' - Grindhouse style. This is comically used in the final battle, where the "movie" cuts off due to "missing slides", before returning, showing that G and Washington miraculously survived the battle, saved Varla's brain, and "found" a pair of mini guns lying on the floor (without which Isaac notes that they'd probably have been killed).

Sega approached developer Headstrong Games to work together on a project, letting Headstrong work with The House of the Dead due to their passion for the series.[1]

The House of the Dead: Overkill originally had the same style as previous House of the Dead games. Other themes, such as steampunk, were also considered. Headstrong ultimately chose an exploitation film theme after watching the 2007 horror-comedy film Planet Terror; this influenced the art style, plot, and marketing. Headstrong worried that players from Japan, where The House of the Dead originated from, would not like this Western-centric direction.[1]

The developer spent "a lot" of time creating the characters and universe, to the extent of devising character family trees. Detective Washington was modeled after rapper Common, Varla Guns after glamor model Vikki Blows, Papa Caesar after Burt Reynolds, and Agent G on Keanu Reeves as he appears in the 1991 action crime film Point Break.[1]

The game was also available in a limited collector's edition that included Prelude to an Overkill, a graphic novel prequel to the game. A special release of the game in Australia, the "Bang Bang Box", came packaged with the graphic novel in addition to two Wii Remote gun shells modeled after the AMS pistols carried by the main characters in the game.

Sean Ratcliffe, then-Vice President of Marketing at Sega of America, stated that customers responded well to Overkill and that the game "absolutely" met Sega's expectations.[3]

Upon release, The House of the Dead: Overkill received a generally favorable response from critics, with an average review score of 81% at Game Rankings and 79/100 at Metacritic. Many critics praised the fast-paced, balanced gameplay, with X-Play stating "the arcade-style shooting is satisfying and provides a challenge for experienced players" yet "easily conquered for those who can’t aim a Wiimote to save their life." Games Radar found the simple gameplay to be "varied enough to keep the momentum going." Although considered to be easier than past games of the series, GameSpot calling the difficultly a "cake walk" at times, Eurogamer said the game "almost never tries your patience, and it's made with such infectious and irreverent glee and such obvious pride, you can't help but join in."

The over-the-top B movie grindhouse-style was particularly praised. Game Informer stated "the parade of F-bombs and one-liners fit in perfect harmony with the grindhouse presentation", even recommending it to Quentin Tarantino fans. GameSpot claimed it "reinvents the aging shooter series for the better with an over-the-top grindhouse theme that resonates in its every aspect, from the hilarious story to the fantastic vintage soundtrack." Due to the adult nature of the game, GameDaily called it "a digital slaughterhouse full of carnage that'll make you happy to be an adult Wii owner" and Nintendo Power calling it "one of the Wii's greatest guilty pleasures". Edge stated that Overkill "raises the bar for third party production values on this generation’s best-selling console."

Though 1UP "still enjoyed the game", they did consider that "with its constant stream of expletives and toilet humor, it may turn just as many people away", starting their review with a disclaimer for younger gamers not to play, being strictly an adult game. Another issue critics found was a number of technical issues, particularly with the frame rate, which IGN called "sketchy" and "sad to see in a game that has so much amazing content in it." GamePro also experienced this, notably when "the screen became cluttered with enemies", originally hoping the issue to be fixed before the game’s final release. Another issue were glitches, with Computer and Video Games reportedly experiencing no enemies appearing at all at times and sometimes requiring to restart the console.

It was confirmed by Dread Central that the game is set to receive a Guinness World Record for being The Most Profane Game of All Time. It was later dethroned by Mafia 2 that same year. 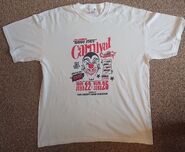