Despite controversy for its violence, The House of the Dead was well-received and has become a franchise. A sequel, The House of the Dead 2, was released in 1998 to critical acclaim. Although series director Takashi Oda does not consider the enemies zombies,[2] the game nonetheless has been credited for popularizing zombies in the media.[3] 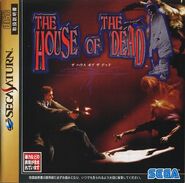 Retrieved from "https://thehouseofthedead.fandom.com/wiki/The_House_of_the_Dead_(1996_video_game)?oldid=24072"
Community content is available under CC-BY-SA unless otherwise noted.