The Wiki of the Dead
Register
Don't have an account?
Sign In
Advertisement
in: Games, Main series

The reality was crueler than a nightmare.

Set in a post-apocalyptic 2019, the game follows AMS agent Thomas Rogan's disappearance within the EFI Research Facility, and his daughter Lisa and former partner G's journey to find him.

III was developed on the Xbox-based Sega Chihiro arcade hardware. It lifted gameplay mechanics from the 2000 Namco rail shooter Vampire Night; its director, Yoshinori Tomoyasu, was involved in production. III was the last House of the Dead game that WOW Entertainment president Rikiya Nakagawa produced, as he would resign from his position in 2003.

The game received generally positive reviews, with praise for its graphics but criticism towards its linearity and short length. It was ported to the Xbox, Microsoft Windows, the Nintendo Wii (in the compilation The House of the Dead 2 & 3 Return), and PlayStation Network. The game also received a spin-off,The Typing of the Dead 2, in 2007. A sequel, The House of the Dead 4, was released in 2005.

In a post-apocalyptic 2019, retired AMS agent Thomas Rogan and his team of military commandos raid the EFI Research Facility for the source of humanity's downfall. The raid is botched, as the entire team is killed, leaving only Rogan and team captain Dan Taylor alive. When the duo finds the source, Death, a behemoth in a security guard uniform, kills Taylor and injures Rogan, who is approached by an unknown figure. Contact with him is lost.

Two weeks later, on October 31st,[1] Rogan's 20-year-old daughter Lisa and former partner G arrive at the EFI building to search for him. They fight biologically-engineered creatures, including Death twice; the Fool, a deformed sloth; and the mutant plant-like Sun. Along the way, Lisa muses about her and her mother's estranged relationship with Rogan.

Flashbacks depict genetic engineer Dr. Curien, the perpetrator of the 1998 Curien Mansion incident, in his pursuit to cure his terminally-ill son Daniel.[2] While successful, Curien went mad after his research team abandoned him, producing Magician and Wheel of Fate to "change the future".[3][4][5]

Lisa and G reunite with Rogan, who reveals his rescuer to be Daniel Curien himself. While G cares for Rogan, Lisa and Daniel fight to Wheel of Fate's laboratory. Daniel reveals that Wheel of Fate is his father, whose body has undergone a 19-year resurrection process; he prematurely wakes it through hacking. Wheel of Fate seeks mankind's destruction and resurrection. Upon defeat, he laments world overpopulation and begs for his son's forgiveness; Daniel, refusing to recognize the creature as his father, destroys him with Lisa.

While leaving the EFI building, Rogan and G discuss the uncertain future. Rogan is optimistic, stating that it is up to the next generation "to believe in themselves, and walk their own paths".

There are four possible endings to the game. If the player clears the game in under three credits, one of three endings is played based on which of the three selectable levels was chosen last. Otherwise, the default "normal" ending is achieved.

The House of the Dead III retains the gameplay of its predecessors: as the camera travels a predefined path, players shoot enemies to avoid the loss of lives through damage. Barrels and other objects can be destroyed to reveal bonus items, which will either increase the player's score or award extra lives.

III introduces pump-action shotguns as the standard weapons. They can hold up to 6 bullets before reloading and can hit multiple enemies at once, especially those approaching close together or in a line. The arcade version has physical shotguns which must be pumped to reload; console versions either have automatic reloading or require players to point their aiming device off-screen instead.

Instead of civilians, there are "partner rescue" sequences where one player character will be isolated and trapped by creatures, requiring the other to save them. The most dangerous creatures are highlighted in red before the event begins. Success results in a bonus life; failure does not, although there is no life penalty if a trapped partner is attacked or accidentally shot. In multiplayer games, the captured player's weapon will be disabled during the sequences. Successfully finishing all "partner rescue" events unlocks a secret stash of bonus items at the end of the game.

Boss battles now have a smaller meter beneath their health bars. This meter must be emptied via repeated shots to boss weak points so that their attacks are disrupted. Some bosses also appear in the middle of levels, rather than at the end.

Other features III introduced to the series include:

The House of the Dead III consists of 6 chapters, with the first (chapter 0) being a prologue:

Chapters 2 through 4 take place in three player-selectable areas. Because of the game's branching path mechanic, each area has two versions; these vary depending on the route taken in chapter 1, and the order of which the three areas are chosen.

The Typing of the Dead II

Originally titled with a number instead of a roman numeral,[6] The House of the Dead III began development on the NAOMI arcade hardware before switching the NAOMI 2 board.[7][8] The game was ultimately a launch title for Sega's Xbox-based Chihiro board.[9] These changes quashed Sega's original plan for a Dreamcast port of the game.[7]

Takashi Oda returned as the director, with Vampire Night director Yoshinori Tomoyasu serving as the game planner.[10] The House of the Dead III was the last game in the series with Sega WOW Entertainment head Rikiya Nakagawa as producer;[11] he resigned in 2003, a year after III's arcade release, and was replaced by fellow House of the Dead producer Kazunari Tsukamoto.[12]

For more unique gameplay, the team chose a pump-action shotgun as the player's weapon. The shotgun also inspired the Time Attack mode, which was devised as conveying tension through diminishing time rather than limited lives. Tomoyasu observed that the shotgun's rate of fire correlates to the player's physical strength.[10]

The branching paths were simplified to mostly stage selection; the team felt that in previous games, it was often difficult to understand what triggered different paths. In addition, boss fights could occur in the middle of a stage as opposed to the end of it.[10]

The team used shading techniques from American comic books.[10] Cel-shaded graphics were also utilized, and were originally cartoonish.[8][6] This art direction was reworked to be more realistic.[13] It has been speculated that the change was triggered by negative player feedback.[6]

The Xbox-based hardware brought increased polygons, allowing for more creatures to appear on-screen at once. Motion capture was used for the hand movements of characters and creatures. While gore was ultimately included, Tomoyasu acknowledged that it is as controversial as it is "exhilarating" for some players.[10]

Sega held a "Become a Zombie" contest from October 25th to November 23rd, 2001.[14][15] Participants submitted photos and short explanations of their zombie (creature) costumes, with the winner becoming an enemy in the final game. Finalists were selected on November 30th of that year and were judged by The House of the Dead III staff members.[15] The winning submission was used for a creature named Meat Man, who appears once in the EFI Genome Ward level.

To celebrate The House of the Dead III and 4's release to PlayStation 3 in 2012, Sega's English blog held a contest wherein fans wrote haikus as an "ode" to the creatures. PlayStation Move controllers and download codes for III were offered as prizes.[16]

The Xbox port was released on October 24th, 2003, and the PC version was released in 2005. The Xbox version was notable for being only one of three games for the console that supported a light gun controller, with the other two being Silent Scope Complete and Starsky & Hutch.

The PlayStation 3 port was announced by Sega on January 5th, 2012.[17] It was released on February 7th of that year.[18] Due to a restructuring of the PlayStation Store ahead of the PlayStation 5's November 2020 release, as of October 19th and 28th, 2020 The House of the Dead III is no longer purchasable on web or mobile-based devices, respectively; players must instead access the store directly from a PlayStation 3.[19]

It was announced in 2021 that PlayStation 3, PSP and Vita games would be discontinued from the PlayStation Store on July 2nd, 2021.[20] This meant that The House of the Dead III would be unavailable for purchase, though those who had already bought and downloaded the game could play it. However, Sony reversed this decision on April 19th, 2021, with PlayStation 3 and Vita games remaining available while the PSP will discontinue as planned.[21]

The mini game starts with Lisa Rogan and G bidding the player(s) farewell as they enter a "time-travelling" elevator. The elevator will stop at the years 2015, 2010, 2005, and 2000. During each of these stops, the elevator door will open and the player(s) are greeted by hordes of creatures.

The player(s) must kill the creatures before the doors close and depending on their performance, the player(s) are rewarded with bonus items used of Original Mode. The elevator will make a final stop at the year 2000 where the player(s) see James Taylor and Gary Stewart preparing themselves to face the incoming creature horde.

The Xbox version also included a 13-minute preview at the then-upcoming film House of the Dead, including a behind-the-scenes look with input from director Uwe Boll. 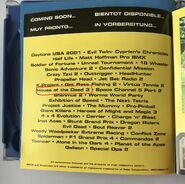 Announcement for the game on European/French release of Virtua Fighter 3. 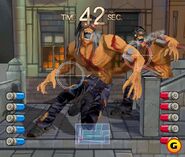 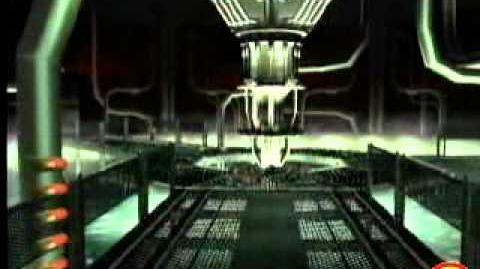 The House of the Dead III- Early Prototype Trailer
An early trailer for III's prototype.

House of the Dead 3 (PS3) - Behind the Scenes
Interview with The House of the Dead series director Takashi Oda and producer Yasuhiro Nishiyama. On the home port, this is unlocked by beating the game.