Type-6805, codenamed "The Lovers" (ラヴァース, Ravāsu?), was a creature consisting of a small male tarantula connected to a larger female.[1] Together, they are the second boss in The House of the Dead 4.

The male tarantula slashes prey with his massive spiked legs; the female may bite players, incapacitating them with webbing, or give birth to attacking offspring called Taran. The Lovers' weak point is the male spider's head. 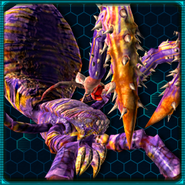 Retrieved from "https://thehouseofthedead.fandom.com/wiki/The_Lovers?oldid=27098"
Community content is available under CC-BY-SA unless otherwise noted.