The Wiki of the Dead
Register
Don't have an account?
Sign In
Advertisement
in: Pages needing references, Games, Spin-offs

The Typing of the Dead (ザ・タイピング・オブ・ザ・デッド, Za taipingu Obu za deddo?) is a horror-themed educational game developed by Sega's Smilebit division. Originally released to arcades in 1999, it was later ported to Microsoft Windows and the Sega Dreamcast in 2000 and 2001, respectively. The game also received a Japan-exclusive PlayStation 2 release in 2004 under the subtitle Zombie Panic (ゾンビパニック, Zonbipanikku?).

The Typing of the Dead features the same story as The House of the Dead 2, but modifies the gameplay so that players must type words, letters, and phrases to defeat creatures.

Rather than using a light gun like its predecessor, The Typing of the Dead requires the player to type short phrases in order to kill creatures. At certain locations, the player will need to complete a certain mission (e.g. "Kill ten zombies [creatures] in thirty seconds") in order to receive a certain reward. Boss battles require the players to meet certain criteria in order to damage the bosses and keep themselves from getting hurt (such as choosing and typing the correct answer to a question, or typing a phrase without making a mistake). The gameplay is otherwise identical to The House of the Dead 2, including the branching paths and rescuing civilians.

Main article: The House of the Dead 2#Plot

The player can either play a short demo of the game or play through the game from start to finish in the same manner as the arcade port.

Besides being able to choose the level to start on, the Original Mode offers a few enhancements to the Arcade Mode. Power-ups, rankings, typing ability tracking, and unlockables are a few examples of what this mode has to offer.

A humourous tutorial on how to touch-type with the QWERTY keyboard.

A series of minigames which track and improve specific typing abilities: Speed, Accuracy, Reflexes, and Special Keys. Each skill has three minigames associated with it, and progress is tracked by the record book.

Allows the player to play competitively or cooperatively online with his or her friends.

This unlockable mode pits the player against one of several AI controlled players in a single chapter of the game. Whoever gets the highest score by the end of the level wins.

Configures options like difficulty, lives & continues, keyboard type (UK or US) and includes a sound test.

The Typing of the Dead had a much lighter and more comedic tone than the game it was based on, perhaps reflected best in the multiple endings. Depending on how many questions answered correctly when fighting against Emperor (typing an "incorrect" answer properly still damages the boss), one of three endings will occur:

The credits sequence consists of a mini-game where players are challenged to type the names of the developers before they disappear from the screen. If enough names are typed quickly, creatures are freed from their tanks, after which they begin to dance.

Main article: The House of the Dead 2#Chapters

Main article: The House of the Dead 2#Bosses

Overall, The Typing of the Dead was well-received by critics as being an enjoyable game. Reviewers appreciated the absurdist humor that the game's format created, especially in the unusual phrases the game generates during later levels. The sub-par voice acting of the original The House of the Dead 2 was also considered to add to this aspect of the game.

One area of the game which was generally criticized, to varying degrees, was the quality of the graphics, which had not been updated from the original House of the Dead 2. PC World was so unimpressed with the game's premise they listed it as a runner up on a "Top Ten Worst Games" list.

Game Informer has named the game the weirdest game of all time.

Aside from the PC release in 2000 and the Dreamcast port in 2001, the game received several revisions, many of which were only released in Japan.

The first among these was The Typing of the Dead 2003 for the PC, which still used the The House of the Dead 2 engine. This version introduced Master Mode, which included new challenges, and VS Expert Mode, where players could compete against opponents whose skills are taken from the top players across the country.

The next year, The Typing of the Dead 2004 was released, also for the PC, which added and tweaked gameplay elements to make the game much more accessible for children, making it easier for them to play along with older players. A Kids Mode is added that turns the player characters into young children, which also adds a Japanese Dub for the story dialogue. A network mode was added that allowed players to play competitively or cooperatively online with others, but the service was discontinued on June 30, 2008. VS Expert Mode was updated and additional keyboard support was added.

The game was ported to the Playstation 2 in 2004 under the title The Typing of the Dead: Zombie Panic.

A proper sequel, The Typing of the Dead II, was released in 2007 as an arcade release, then ported to the PC in 2008. It now uses The House of the Dead III as a basis.

The Typing of the Dead would be the first educational spin-off based on The House of the Dead 2. English of the Dead, released in 2008 for the Nintendo DS in Japan, uses a similar concept, now having players draw letters to English words on the touch screen using the stylus. It also uses The House of the Dead 2 for its setting, and the characters retain the comical Dreamcast Battery pack.

Other differences to the original 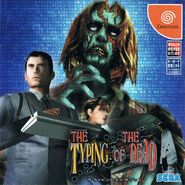 Front cover of the Japanese CD case of The Typing of the Dead.

The AMS agents with their Dreamcasts and keyboards.

The Typing of the Dead Japanese Dreamcast Commercial

The Typing of the Dead 2003's official box artwork.

The Typing of the Dead 2003's opening screen.

The Typing of the Dead 2004's official box artwork.