I am the ultimate being... There is no hope... My hammer of death shall rain down upon you!

The World to James Taylor and Kate Green.[src]

Type-β, codenamed "The World" (ワールド, Wārudo?), was an insectoid creature with ice manipulation powers. He[note 1] is the final boss in The House of the Dead 4.

The World was created by Caleb Goldman to succeed Emperor, awakening 3 years after both were deceased. Wielding ice projectiles, hatchets, and ice dragons, he could grow into new and stronger forms upon defeat. His weak point was his glowing-red heart.

The World was created by Caleb Goldman, the financier of the late Dr. Curien's research. To protect nature from humanity, Goldman developed creatures with Curien's research to slaughter populations. He staged a 2000 outbreak in a large unnamed city, with a creature named Emperor intended to rule over mankind; its successor, the World, grew beneath the courtyard of Goldman's headquarters.

In 2003, years after Emperor's defeat and Goldman's suicide, the latter posthumously staged another outbreak. In the opening of "Pandora's Box", the World awoke to battle investigating AMS agents James Taylor and Kate Green. Upon realizing that the World never stopped growing, James set his AMS PDA to self-destruct, killing himself in the resulting explosion to destroy the creature.

The World is a massive humanoid with dragonfly-like wings and eyes. Frozen up to his waist, the creature uses his hands for support. His entire body (with the exception of his heart) is invulnerable to gunfire.

Every time he is seemingly defeated, the World grows into a seemingly endless line of stronger forms. In his second form, the creature's posture is upright and his wings become tendrils. His attacks are more aggressive.

In his third form, the World molts his skin and emerges as a levitating full-bodied creature. This form is only battled in Loving Deads: The House of the Dead EX. After pursuing players atop a train, the World develops fiery wings and horns. He uses flames and crystals as projectile attacks.

The World is a two-stage fight, with each stage ending after the creature's health bar is depleted. In both stages, the World is an immobile boss whose weak point -- his heart-- is always exposed to gunfire. The creature will perform random attack phases until he is at low health, at which point he will repeatedly perform a final aerial-based attack. The stages increase in difficulty: in the first stage, the player can escape most of the World's attacks by shaking the gun; in the second stage, all of the creature's attacks are inescapable in this manner and are more difficult to stop. 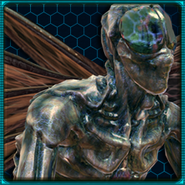 The World preparing to battle James and Kate.
Add a photo to this gallery

Art of the World's true form.
Add a photo to this gallery

Retrieved from "https://thehouseofthedead.fandom.com/wiki/The_World?oldid=32456"
Community content is available under CC-BY-SA unless otherwise noted.