He first appeared in one of the endings of The House of the Dead III, seen walking in the chamber where the Wheel of Fate was defeated and picks up a glowing canister revealed earlier as Daniel's cure. As he holds it in his hands, he chuckles to himself saying, "It appears that he didn't understand its true purpose," and then walks off.

In another ending in The House of the Dead 4, he enters and sits down in a clean office not seen anywhere else in the game, clearly unaffected by the world collapse. He chastises Goldman by saying he was soft and humans have no need of hope, and that the "true end" shall begin. He also mentions the existence of another "Pandora's Box".

In The House of the Dead 4: Special, he appears in the good ending if the player did well enough, appearing in the lab where the Magician was defeated. He states that Pandora's Box has been closed, if there is any hope left. He then says the Wheel of Fate cannot be stopped.

According to an interview with series director Takashi Oda for the Website of the Dead, should another arcade sequel be developed, its story would be based around this character.

Not much is known about the Mystery Man (even this name is unofficial), and as such, his true identity is still unknown. In his first appearance, a brief glimpse of his face could be seen. Since nothing else was known at the time, many have speculated his true identity, with the most prominent being Goldman (under the belief he survived the fall), Harry Harris from the House of the Dead 2 (if he became disillusioned with his injuries inflicted by Strength and turned against the AMS). Not even Overkill's Papa Caesar is out of the equation, or that he may be the successor Goldman was talking about at the ending of HOTD2 (though the aforementioned successor is more likely to be The World).

HOTD4 not only reaffirmed that Goldman was indeed dead, only appearing in flashbacks and recorded messages, but revealed that the Mystery Man was a separate person with a different appearance and voice. He was shown to harbor a strong contempt for humanity, believing they are beyond hope, unlike his colleague Goldman. It has yet to be revealed what his motives and goals are, as well as his previous ties to both Curien and Goldman. Takashi Oda also stated that the character's first appearance was in The House of the Dead III, debunking his identity as a known existing character.

Artwork for the digital home release of HOTD4 show the Mystery Man's face fully uncovered, including the image seen above. 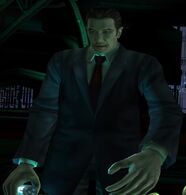 A glimpse of the Mystery Man's face in HOTD3. 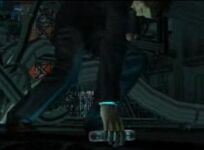 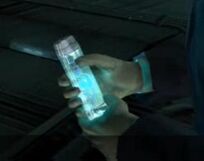 Mystery Man Close up in HOTD4.

Mystery Man photo from HOTD4's home release.
Add a photo to this gallery
Retrieved from "https://thehouseofthedead.fandom.com/wiki/Thornheart?oldid=8393"
Community content is available under CC-BY-SA unless otherwise noted.