Type-8000, codenamed "Tower" (タワー), is a creature consisting of four reddish-bronze serpents and a larger blue one which controls them. Together, they are the third boss in The House of the Dead 2. 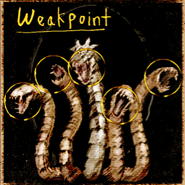 Tower weak point entry in G's file.
Add a photo to this gallery
Retrieved from "https://thehouseofthedead.fandom.com/wiki/Tower?oldid=14086"
Community content is available under CC-BY-SA unless otherwise noted.