The Wiki of the Dead
Register
Don't have an account?
Sign In
Advertisement
in: Games, Non-HOD games

Let us settle this once and for all. Who shall live and who shall die.

Vampire Night (ヴァンパイアナイト, Vanpaia Naito?) is a Gothic horror-themed rail shooting game developed by WOW Entertainment (now Sega AM1) and published by Namco to arcades in 2000. It was later ported to the PlayStation 2 in December 2001.

Set in 2006, the game follows vampire hunters Michel and Albert as they journey to settle a 300-year conflict with Auguste, their creator and the leader of a vampiric army that has terrorized a French village.

300 years ago in a battle against the Vampire Hunters, Auguste desired to end his life. When he began to fear death, however, the Vampire Hunters lost their strength since Michel and Albert were merely shadows created by Auguste to kill himself. Now, 300 years later, Auguste wished to end the battle once and for all...

300 years ago, the vampiric leader Auguste tired of immortality and created vampire hunters Michel and Albert to end his own life. However, fearing death, he stripped the hunters of their powers and enlisted his followers – Bathe'lemy, a knight; Guillaume, a mad scientist; Rauoul, a misanthropic fencer; and Diane, a mermaid and Auguste's lover – to stop them.

In 2006, Michel and Albert track Auguste's location to a castle located near a 19th century-era French village. Along the way, they rescue a young girl named Caroline from villagers who are under the influence of the vampiric Sarcoma. Bathe'lemy duels the hunters in the village square, but is defeated.

In the castle, Guillaume kidnaps Caroline and is pursued by the hunters to the rooftops. After a fight, he commits suicide out of refusal to be defeated by humans. Rauoul, seeking to avenge his lover Sophie's death, sacrifices his soul to become a vampire and fight the hunters. Upon defeat, he transforms back into a human; Michel urges Rauoul to "fight [his] soul once again". Diane attempts to waylay the hunters, rejecting Caroline's pleas for humans and vampires to compromise, but is also defeated; before dying, she reconsiders Caroline's idea and bids Auguste farewell.

Michel and Albert confront Auguste, who transforms into his vampire form to do battle. Although Auguste is killed, the hunters – their mission completed – let the rising sun end their own lives as well.

Six months later, Caroline pays her respects the vampire hunters' graves, stating that "[her] heart shall remember all... That day, that moment, and what happened". The game ends as the wind carries her summer hat away.

Vampire Night recycles numerous gameplay mechanics from the House of the Dead games. Players shoot approaching enemies with a light gun and reload by shooting outside the screen. The guns can shoot up to 8 bullets before reloading. Damage from enemies removes a life; losing them all results in a game over. Bonus lives are potentially awarded by rescuing villagers, finding life-up icons in destroyable objects, or earning a good ranking at the end of a level. Chapters 2, 3, and 4 also have branching paths, where the player's actions alter the route through the levels.

Villagers behave similarly to the civilians from the House of the Dead series in that they often award bonus lives, but are under the influence of the Sarcoma parasite. The player must shoot the Sarcoma in order to rescue them; failure results in the villager becoming a vampire enemy but there is no life penalty.

Enemy health is measured by health bars that appear over their bodies. Every enemy has a weak point that must be shot to kill them quicker. Bosses have health bars as well as a "cancel" meter, which must be depleted quickly in order to stop attacks.

Yoshinori Tomoyasu, the planner of Sega WOW Entertainment, sought developing a game on Namco's PlayStation 2-based System 246 arcade hardware. He was then introduced to Namco president Masaya Nakamura by former Sega AM1 head Rikiya Nakagawa.[2] Ultimately, both companies collaborated: Sega would produce a game on the System 246 hardware, with Namco helping manufacture and distribute it.[3] In addition, Sega adopted Namco's practice of porting System 246 arcade titles to the PlayStation 2.[4]

Tomoyasu served as the director and planner of Vampire Night.[2] Takashi Oda, the director of the main House of the Dead series, was also involved in development.[5] The game was inspired by the 1999 science fiction film The Matrix. Although the vampire hunters were given more character than protagonists in the House of the Dead games, more focus was placed on the boss design.[2]

Tomoyasu altered The House of the Dead and The House of the Dead 2's civilian mechanic so that players must "[snipe]" small parasites from their bodies; shooting the civilian instead transforms them into a vampire enemy. To balance Vampire Night's difficulty, Tomoyasu removed life penalties from shooting civilians and increased the player's bullet count from 6 to 8.[2]

Tomoyasu and another director oversaw the development of Vampire Night's PlayStation 2 port. Due to the team's unfamiliarity with the System 246 hardware, the port required lots of "trial and error". There were ideas to add more enemies, levels, and branching paths in the port's Special Mode, but they could not be realized within the time allotted to port the game.[2]

A PlayStation 2 port of the game with additional game modes was released in Japan on December 6, 2006.[6]

Back cover of North American variant. 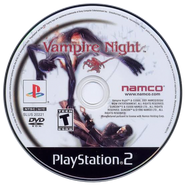 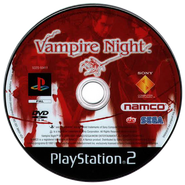 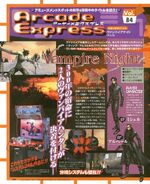 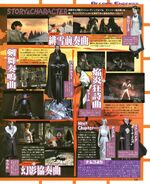