For the level of the same name, see Wheel of Fate (chapter).

The Wheel of Fate to Lisa Rogan and Daniel Curien.[src]

Type-0000, codenamed "Wheel of Fate" (ホイール・オブ・フェイト, Hoīru Obu Feito?), was the resurrected, computerized form of genetic engineer Dr. Curien. Awakening 21 years after his death, he appeared as a metallic humanoid creature with electrokinetic and levitational powers, surrounded by a wheel that was spun to deflect and choose attacks.

After his death on December 18th, 1998, Curien's body underwent a nineteen-year resurrection process. Reawakening in 2019 before his son, Daniel Curien, and Lisa Rogan, Wheel of Fate vowed to "destroy [and] resurrect everything." Upon defeat, he pleaded for mercy but was ultimately destroyed.

Wheel of Fate is a metal humanoid surging with electricity, surrounded by a spiked wheel. He has long slicked, horn-like appendages on his head, glowing white eyes, and a sun-shaped emblem on his chest. In combat, he summons projectiles and shields, evading gunfire with fast movement.

With his high health and mobility, Wheel of Fate is one of the longest boss battles in the House of the Dead series. Three of his five attack patterns are determined by a random spin of his wheel; the last two occur at lower health. Fast, precise shooting is critical to avoid Wheel of Fate's attacks (especially on console ports of The House of the Dead III, whereupon reload speed is slower than the arcade version).

The following is a comprehensive, strategic guide to the Wheel of Fate's attack patterns:

In between attacks, Wheel of Fate's chest is exposed for damage.

Wheel of Fate to Lisa Rogan and Daniel Curien.[src]

This is the world you humans wanted... The world... is overpopulated... Even you must realize that! Daniel, you need me...

Wheel of Fate after being defeated.[src]

Pencil sketch of Wheel of Fate during The House of the Dead III's development.
Add a photo to this gallery 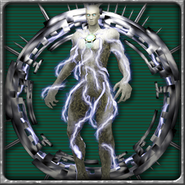 Wheel of Fate in the Famitsu The House of the Dead III Perfect Guide.
Add a photo to this gallery 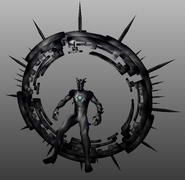 Wheel of Fate's character model from The House of the Dead III. 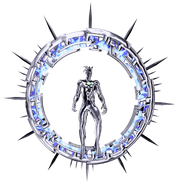 Wheel of Fate's model
Add a photo to this gallery
Retrieved from "https://thehouseofthedead.fandom.com/wiki/Wheel_of_Fate?oldid=23936"
Community content is available under CC-BY-SA unless otherwise noted.